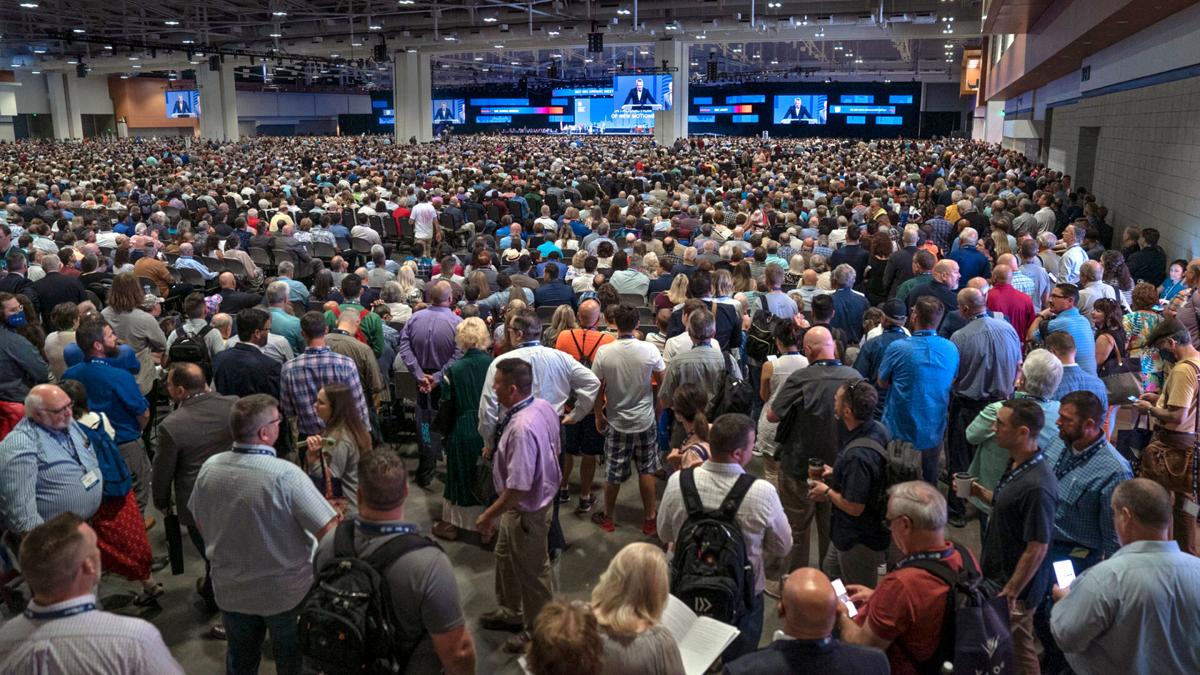 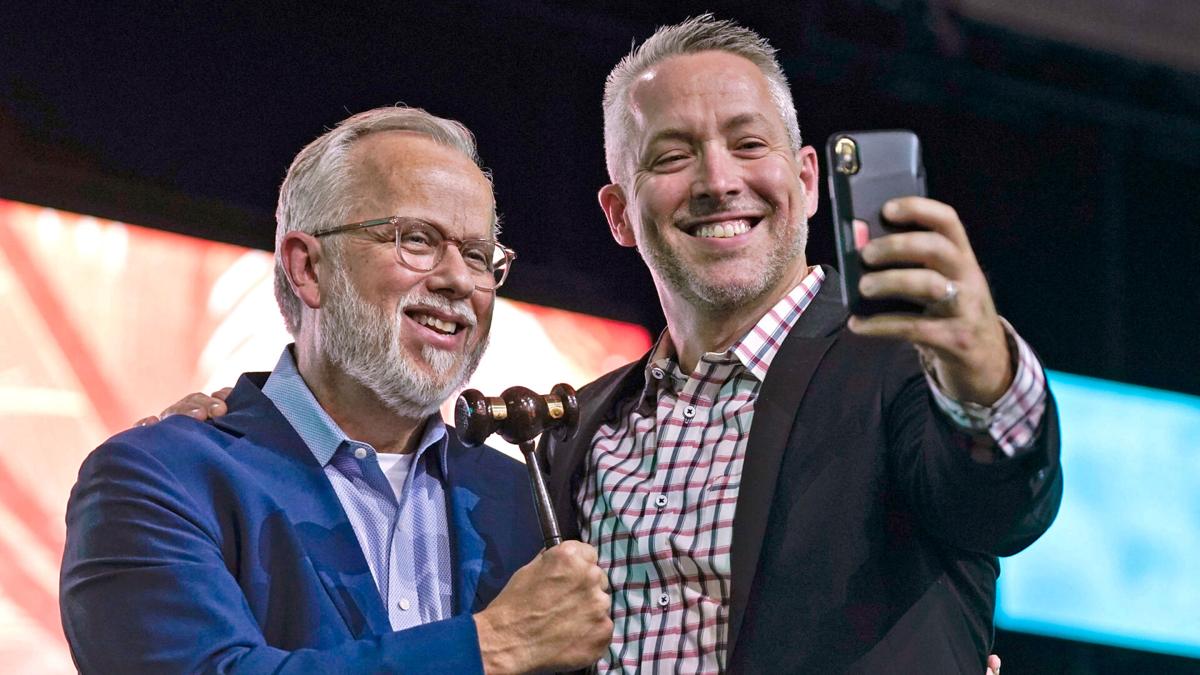 Just after the close of the 2021 SBC Annual Meeting, incoming SBC President Ed Litton (left) pauses for selfie with outgoing SBC President J.D. Greear, who had just passed off the gavel to Litton. SN4613 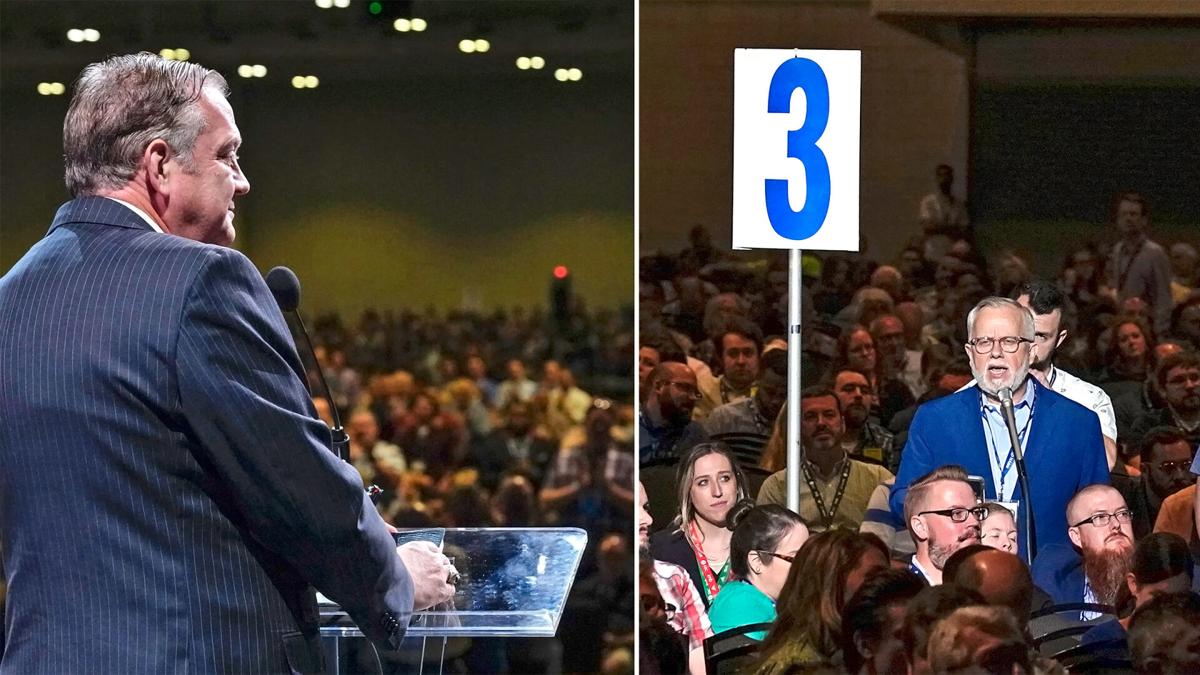 Albert Mohler (left) and Ed Litton (right) brought a moment of unity when the two publicly affirmed one another during Mohler’s Southern Baptist Theological Seminary report during the 2021 SBC Annual Meeting. SN4613 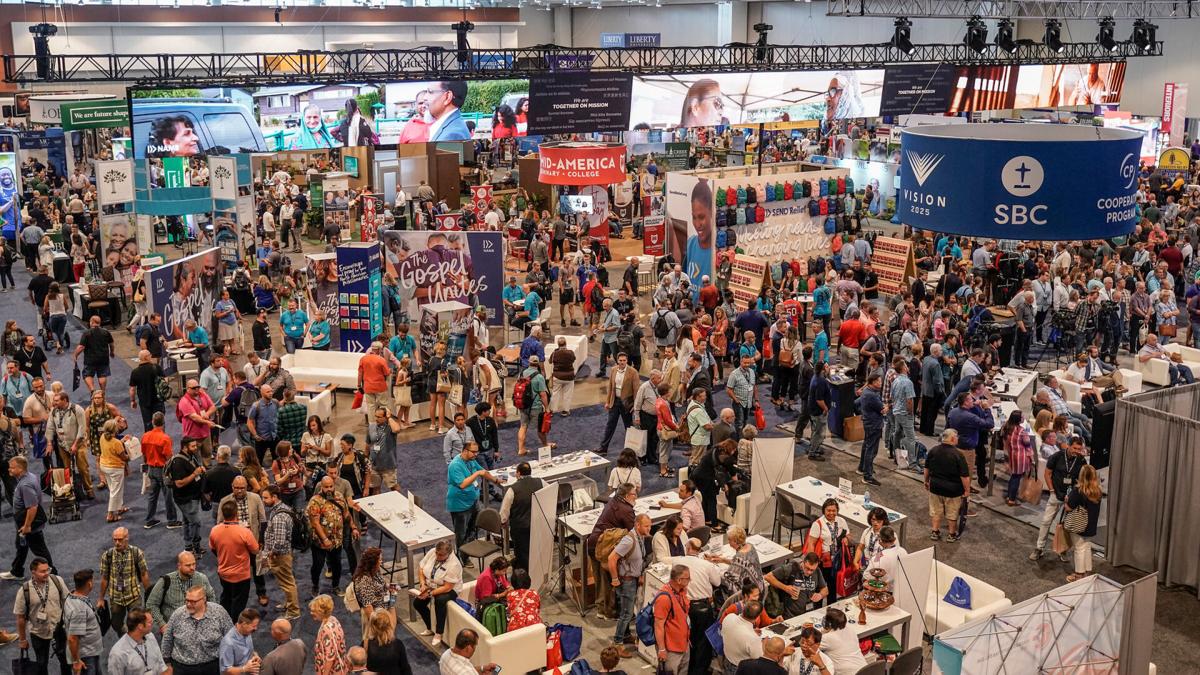 A large crowd of messengers, many of whom were attending their first conference since before the COVID-19 pandemic, made for a busy exhibit hall. SN4613

Just after the close of the 2021 SBC Annual Meeting, incoming SBC President Ed Litton (left) pauses for selfie with outgoing SBC President J.D. Greear, who had just passed off the gavel to Litton. SN4613

Albert Mohler (left) and Ed Litton (right) brought a moment of unity when the two publicly affirmed one another during Mohler’s Southern Baptist Theological Seminary report during the 2021 SBC Annual Meeting. SN4613

A large crowd of messengers, many of whom were attending their first conference since before the COVID-19 pandemic, made for a busy exhibit hall. SN4613

NASHVILLE (BP) – From the moment the gavel, it was clear that the messengers to the 2021 Southern Baptist Convention Annual Meeting June 15-16 in Nashville were ready to make changes and challenge traditions in the name of advancing the Gospel.

SBC President J.D. Greear had previously retired the Broadus Gavel named for slaveowner John Broadus and had been used continuously at annual meetings by SBC presidents since 1872. Instead, he gaveled the convention to order with the Judson Gavel, named after Baptist missionary Adoniram Judson.

The convention's 15,726 messengers – the most since 1995 – seemed to follow Greear's lead, taking action to protect victims and hold leaders accountable even when it meant overturning the decisions of convention committees – especially the Executive Committee (an 86-member body charged with acting on the SBC's behalf between annual meetings).

Messengers called for the creation of a task force appointed by the new SBC president to oversee an independent review of the Executive Committee over allegations of mishandling reports of sexual abuse. They also overwhelmingly defeated a revision of the SBC Business and Financial Plan proposed by the EC.

Ed Litton, pastor of Redemption Church in Saraland, Alabama, was elected SBC president in a runoff with a 52 percent majority over Georgia pastor Mike Stone, immediate past chairman of the SBC Executive Committee and a steering council member for the Conservative Baptist Network, a group alleging leftward drift in the convention. Litton has suggested the CBN is unnecessary because Southern Baptists are unwaveringly conservative.

Messengers presented 32 motions from the convention floor, the most since 2010. While at times tense, the debate was punctuated with moments of unity. A day after the presidential election, Litton took a floor microphone as a messenger to commend Mohler as a "statesman" and "gift of God" to Southern Baptists during Mohler's Southern Baptist Theological Seminary report. Mohler responded by congratulating Litton publicly on his victory.

The Executive Committee drew opposition at multiple junctures. Messengers claimed the EC had too much authority and needed to be held accountable.

Tennessee pastor Grant Gaines moved that the new SBC president appoint a task force to oversee a previously announced investigation into alleged EC mishandling of sexual abuse claims. Initially, the motion was referred to the EC by the Committee on Order of Business. Messengers overturned that ruling by a two-thirds vote and overwhelmingly adopted Wednesday's motion (June 16). The EC had voted June 14 not even to consider a similar proposal by one of its members, Jared Wellman of Texas.

EC President Ronnie Floyd said in a statement following the convention's action, "Today's decision, in whose outcome we are confident, will have the ultimate blessing of removing all doubt in the minds of our community of Southern Baptists allowing us to chart a more confident future, together."

The EC encountered an overwhelming defeat in a proposed revision to the SBC's Business and Financial Plan. EC officer Robyn Hari said the proposal sought to balance between accountability and autonomy of the SBC entities. But messenger Vance Pitman of Nevada called the proposal "an unprecedented expansion of the Executive Committee powers." The recommendation failed on a raised-hand vote.

The convention approved Vision 2025, a five-year plan setting a series of goals for Great Commission advancement. Messengers added to the EC's five proposed Vision 2025 goals on missions, evangelism, and CP, giving a sixth stating the convention's intent to eliminate all racism and sexual abuse incidents. They also amended a goal emphasizing reaching teenagers to those under age 18.

Another EC recommendation rejected by messengers was a proposed revision of Lifeway Christian Resources' Mission and Ministry Statement. The proposal, initiated at the request of Lifeway trustees, was defeated on a ballot vote after messenger Michael Schultz of Kentucky spoke against its adoption due to a proposed deletion of Lifeway's responsibility to assist churches with "homeschool ministries."

The EC also lost an officer when Tom Tucker, a vocational evangelist from South Carolina, was not given a second term by messengers, who voted against an attempt to overturn the Committee on Nominations, which had declined to renominate him. Tucker, a member of the CBN steering council, had been reelected as vice-chairman June 14 by the EC, which acted despite knowing that while eligible to serve, his term was expiring. He was not among the nominees to the EC for the coming year. He could only fulfill the post if messengers amended the 2021 Committee on Nominations report to include Tucker among nominees.

Tucker's term was initially set to expire in 2020 but was extended a year by the cancellation of the 2020 SBC Annual Meeting because of the COVID-19 pandemic. Tucker was then elected EC vice chairman in June 2020.

The EC was not the only committee to have a recommendation overturned by messengers. The Resolutions Committee declined to bring to the floor a resolution submitted by Oklahoma messenger Bill Ascol that called for abolishing abortion. Still, messengers voted by a two-thirds majority to consider it. Then they adopted the resolution after a one-word amendment to soften its initial rejection of any "incremental approach to ending abortion."

The SBC constitutional amendment against racism was among several ways messengers attempted to catalyze ethnic diversity in the convention.

Southern Baptists tapped to serve on committees likewise were diverse. A majority (51 percent) of Greear's presidential appointments to committees were non-Anglo, as were 30 percent of those elected to serve on boards and committees.

Greear drew a standing ovation in his final presidential address when he addressed racial tension within the SBC and told "people of color": "We need you."

Critical race theory (CRT) – the subject of a 2019 SBC resolution that has sparked controversy over the past two years – drew several mentions during the convention, including messenger motions and resolution submissions calling for its denunciation as well as questions to SBC presidents during their reports. Yet, no official convention action addressed CRT by name.

Instead, messengers adopted a broad resolution regarding race and racial reconciliation. The resolution repudiated "any theory or worldview that denies that racism, oppression, or discrimination is rooted, ultimately, in anything other than sin." It also reaffirmed a resolution regarding racial reconciliation on the SBC's 150th anniversary in 1995 in which messengers apologized to African Americans for "condoning and/or perpetuating individual and systemic racism."

Other resolutions adopted by messengers covered, among other topics, the Equality Act, the Hyde Amendment and permanent disqualification from the pastorate of those who have committed sexual abuse.

Sixty-four new International Mission Board missionaries were appointed June 14 in a Sending Celebration. They will join 3,631 IMB missionaries already on the field around the world. Most of the new missionaries stood behind a screen as they introduced themselves during the service, as they could not be identified due to security concerns in their locations of service.

Florida pastor Willy Rice preached the convention sermon, urging Southern Baptists to avoid factions and build their testimony on the Gospel. Next year's SBC Annual Meeting is slated for June 14-15, 2022, in Anaheim, California.