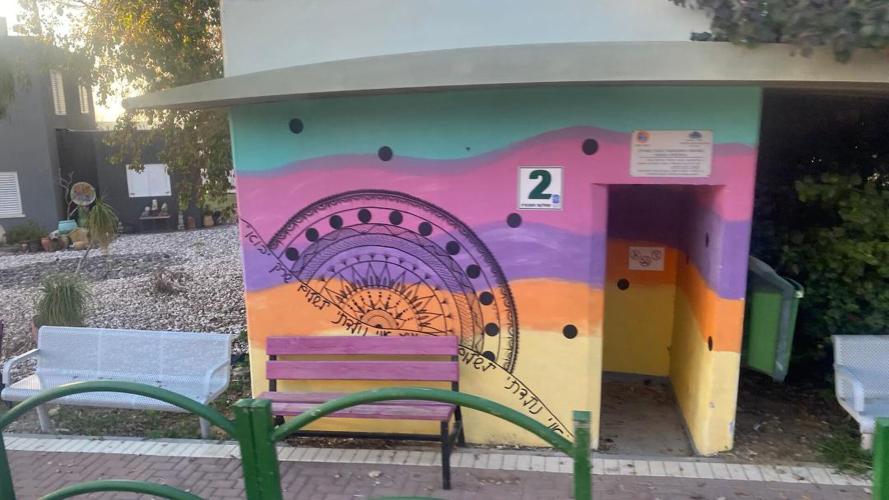 Bomb shelters abound in the village of Netiv HaAsaraa near the Gaza Strip. The offer protection from frequent Hamas attacks. SN5586 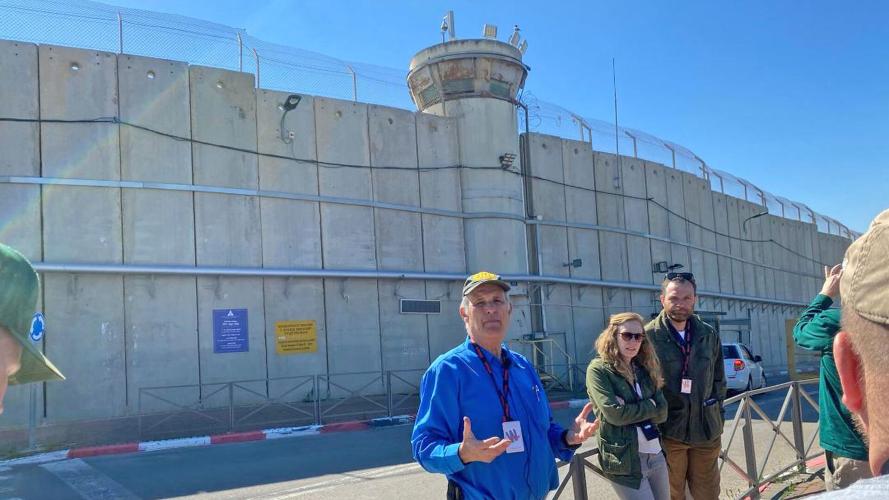 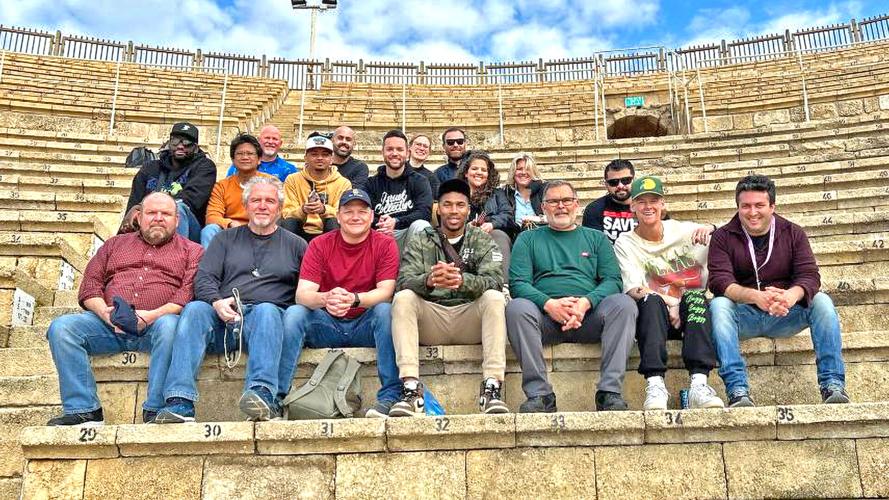 A group from Israel Collective visited Israel in February 2022. Bill Connors, pictured third from the left on the front row, was among the group. SN5586 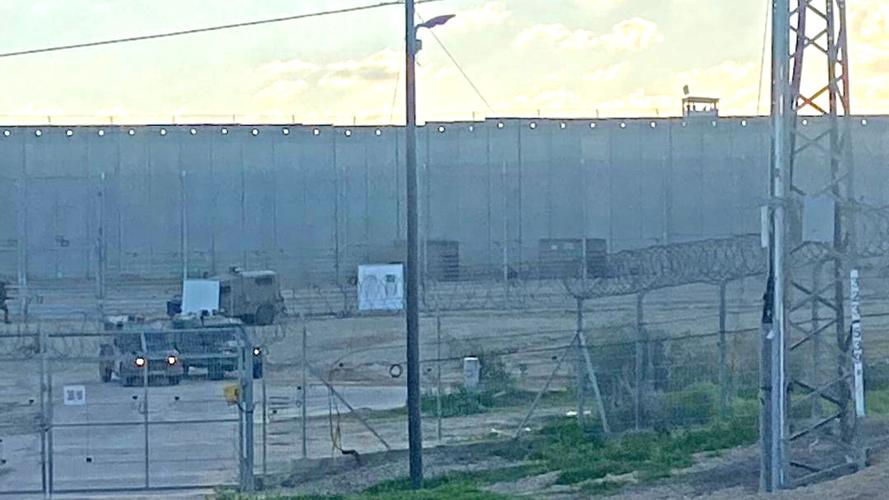 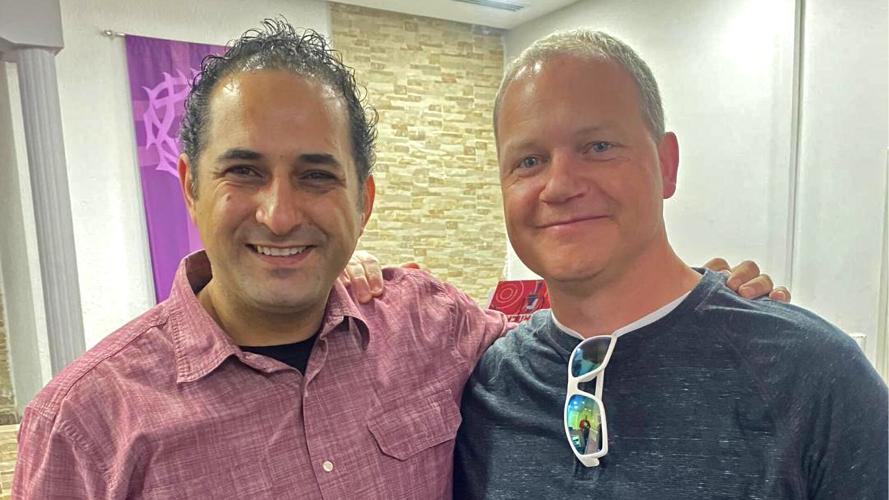 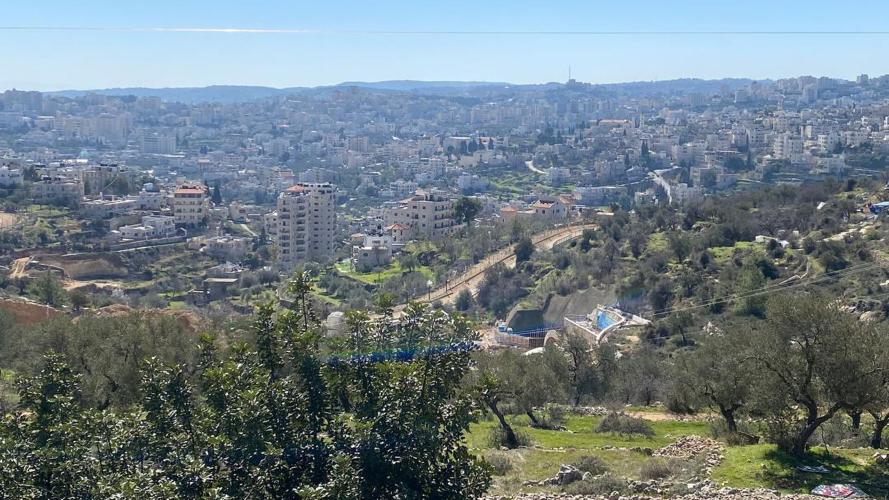 This view of Bethlehem is seen from Jerusalem. SN5586 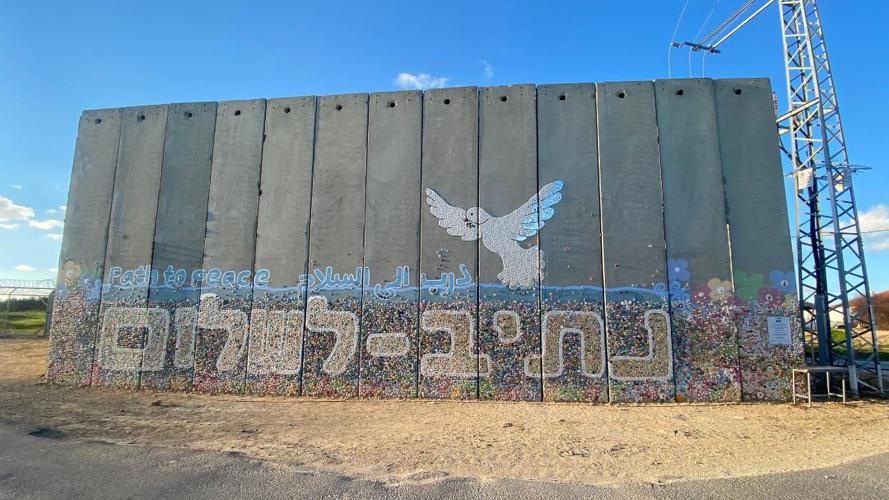 Tiles from visitors to Netiv HaAsara cover the Wall of Peace on an anti-sniper wall facing the Gaza Strip. SN5586

Bomb shelters abound in the village of Netiv HaAsaraa near the Gaza Strip. The offer protection from frequent Hamas attacks. SN5586

A group from Israel Collective visited Israel in February 2022. Bill Connors, pictured third from the left on the front row, was among the group. SN5586

This view of Bethlehem is seen from Jerusalem. SN5586

Tiles from visitors to Netiv HaAsara cover the Wall of Peace on an anti-sniper wall facing the Gaza Strip. SN5586

Connors joined 14 travelers of Israel Collective, a sub-group of Christians United for Israel, for the trip. The group’s purpose was “to educate Christians about the geo-political things going on in Israel, [to help Christians know] how to pray for Israel and Jerusalem, and to open eyes to the complexities of things in Israel,” according to Connors. In a Zoom call, he spoke specifically about geo-political realities he learned on the trip.

A group member said that being in the Holy Land “is like reading the Bible in color.” Connors describe feeling comfortable in-country. “[I] felt very at home in Israel since I had an idea of the geography and was visiting places I was familiar with,” he said. When group members arrived and met their guide in Tel Aviv, Connors recalled, the guide said, “Welcome home.”

The group visited the Golan Heights in northern Israel near the Sea of Galilee before traveling to Jerusalem. For many in the world, the Golan Heights is still considered to be occupied by Israel.The group learned that the Iran funds and supplies the Lebanon terrorist group Hezbollah. Since, Syria and Iran are allies, Syria allows Hesbollah-bound military materials to cross it into Lebanon.

After a couple of days in Israel’s capital city, Jerusalem, the group traveled to Bethlehem in the West Bank. The area consists of three zones. Bethlehem, in Zone A, lies under control of the Palestinian Authority.

Jerusalem and Bethlehem are starkly different. Jerusalem is clean and safe. People are out walking. Bethlehem felt more run-down and less safe, Connors said. In Bethlehem, the group visited the city’s First Baptist Church and met with its pastor, Steven Khoury. The church facility had concrete walls and resembled a compound.

“Bethlehem is a tense place to be a Christian,” Connors said. The West Bank is mostly inhabited by Arab Palestinians. However, he said, “There was never a country called Palestine nor a people called Palestinians. Roman Emperor Hadrian renamed the Judean section to spite the Jews. No one is a native Palestinian.”

Palestinians have held refugee status since 1948. They are the only group of refugees who, after 10 years, are not absorbed into the country where they live, Connors explained. The Palestinian Authority receives funding from United Nations based upon the number of refugees it governs.

Dany Tirza, a retired Lt. Col. of the Israeli army, designed the West Bank Israeli security fence, which at major entry points is actually a wall. The fence and wall are nearly impossible to climb over. West Bank residents can obtain a must to work in Jerusalem. The wall’s “gigantic gate” opens for only a couple of days each year to allow a Jewish pilgrimage to Bethlehem.

According to Connors, he and his trip group never felt unsafe in the West Bank; it was basically peaceful. The only tension was the Palestinian refugee crisis.

Next, the group toured Netiv HaAsara, a moshav (village) outside the Gaza Strip. Group members gathered in a bomb shelter and learned that bomb shelters were everywhere. Tour Guide Yoel told them, “If sirens go off, we have 15 seconds to get to a bomb shelter.” Occasionally, he said, the terrorist group, Hamas, fired rockets from the Gaza Strip into Israel - sometimes with a plan, such as shooting at the power station which was up the coast.

As Connors and his companions topped a hill and faced west, they could see the Mediterranean Sea and the Gaza Strip security wall to the south. Suddenly, they heard a big boom. Yoel said, “The sirens are not going off. [That means] it’s just them doing a military exercise or something in Gaza.”

As the group walked toward the Gaza Strip to see the wall, Yoel pointed out an observation tower he had not seen before. He said, “It’s okay; no one is in there.” But, as they approached the wall, they saw three Hamas soldiers in the tower with binoculars watching the group. The Israeli Defense Force also patrolled the wall.

Connors said, “The situation in Israel is substantially more complex than western media presents it. The liberal West has a tendency to say Israel is the bad guy who came in and took Palestinian land. But, there is no Palestinian land since it was Israel’s for thousands of years before that.”

Israel has peaceful trade agreements with Egypt and Jordan, so it does not worry about those two borders, Connors explained. “The scariest situation is Iran, who hates Israel. Daily state-run [Iranian] TV and radio call for the destruction of Israel, to wipe it out, to push the people into the ocean. They hate the people [of Israel] and want them gone,” he said. Antisemitism is very real. “The reality is that Israel is the only independent democracy in the Middle East. It is important to take the words of Psalm 122:6 and ‘pray for the peace of Jerusalem,’” he said.

Israeli people, and even Arabs living in Jerusalem, appreciate the fact they live in free Israel, Connors explained. “Now that I know people who live in Israel, when I hear something on the news, I can send a message to someone I know and ask, ‘What is the reality?’” Connors said.

At the Museum of Jewish Peoples, Tel Aviv, Connors said he learned that Jewish people are choosing to become secular and are losing their identity as God’s chosen people. “Knowing their heritage, it made me sad,” he said. “How does the remnant come out of this? My heart breaks for Israel in that sense.”

As an alumnus of Israel Collective, Connors was asked to nominate two pastors who influence the lives of young people to go on the next trip. Joe Vivian, his church’s children’s pastor, left for Israel Apr. 3.

The Heart of a Father