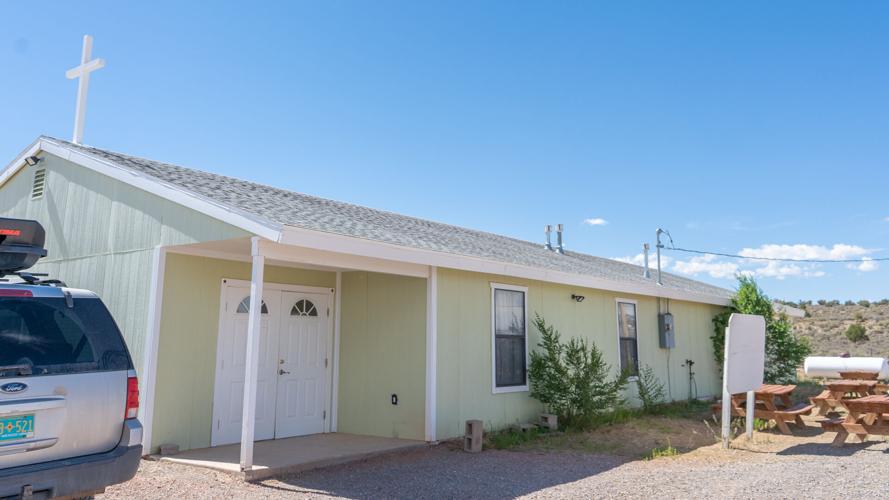 Rock Springs Baptist Church uses its unique position within the Navajo Nation to reach people. Historic evangelism practices have forced the church and its leadership to reach people in the area via unique ministries. SN5971 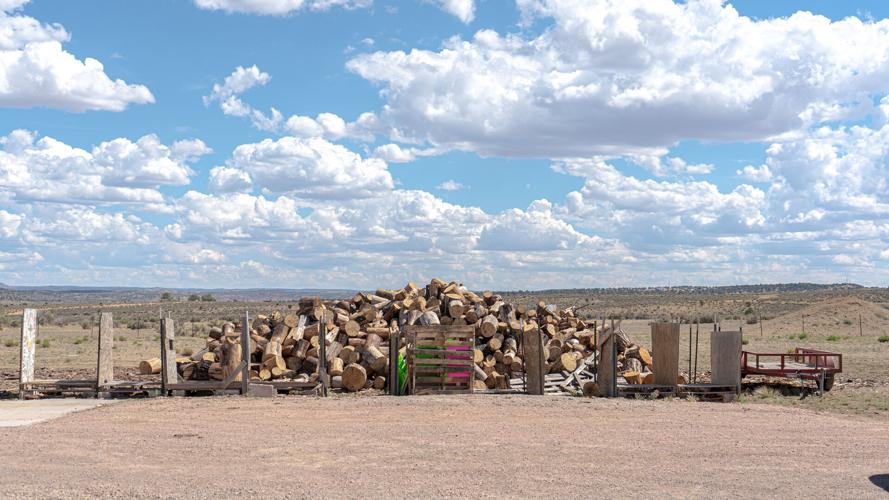 Many homes within the reservation use wood to keep warm during cold winter months. The wood ministry of Rock Springs Baptist Church offers wood to community members who may have no other way to get it. SN5971 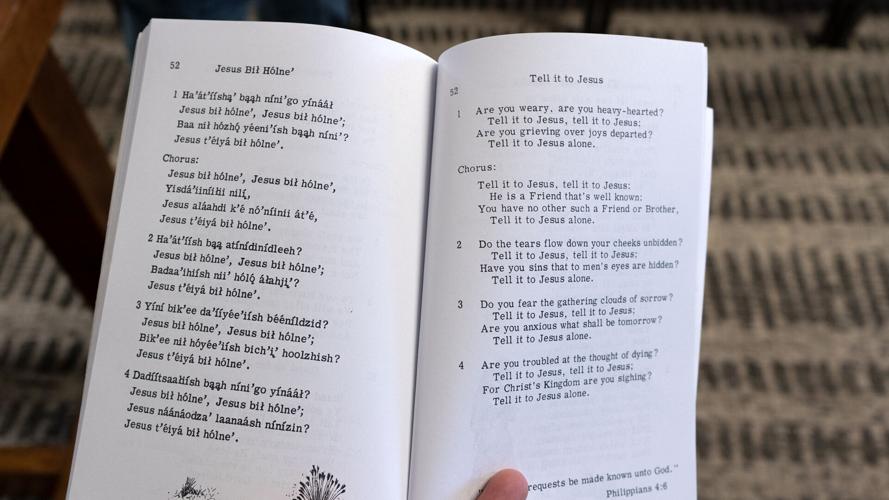 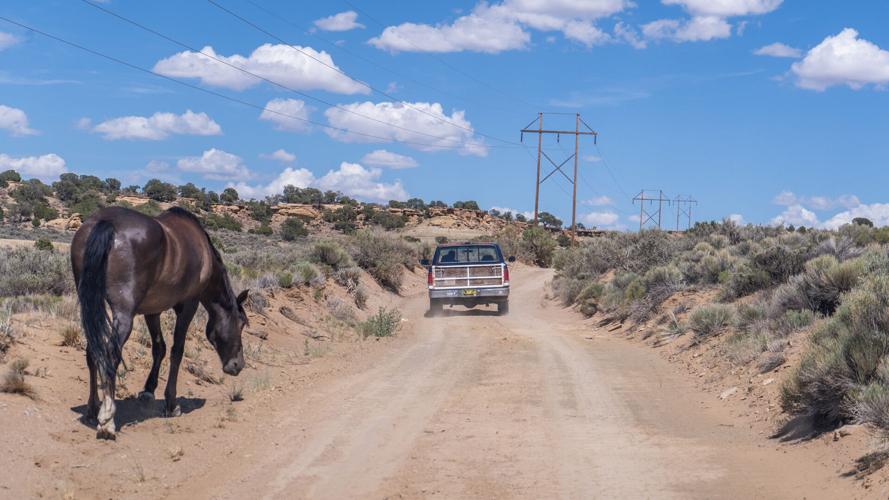 Pastor Lorne Denetclaw leads the way to the church he pastors. The home he is leaving was roughly twenty minutes from the church. Members there have no transportation, so the church picks them up weekly to attend services. SN5971

Rock Springs Baptist Church uses its unique position within the Navajo Nation to reach people. Historic evangelism practices have forced the church and its leadership to reach people in the area via unique ministries. SN5971

Many homes within the reservation use wood to keep warm during cold winter months. The wood ministry of Rock Springs Baptist Church offers wood to community members who may have no other way to get it. SN5971

Pastor Lorne Denetclaw leads the way to the church he pastors. The home he is leaving was roughly twenty minutes from the church. Members there have no transportation, so the church picks them up weekly to attend services. SN5971

GALLUP (BNM) – Learning from the past and adapting to the needs of those around him, Lorne Denetclaw, the pastor of Rock Spring Baptist Church, is reaching his community. The church resides within the Navajo Nation, near Gallup, an area whose unique challenges require a unique ministry approach.

Traditionally, in the 19th and 20th centuries, Christian denominations and the federal government hosted boarding schools for Native American children. The effort sought to assimilate Native Americans into western culture, forcing Christianity upon the population. Capitan Richard Pratt, an historical figure, said the goal was to "kill the Indian in him and save the man."

When asked if the historical practices of assimilation affect Navajo reception of the Gospel today, "Very much…,” Denetclaw said. “From a belief standpoint, a lot of Navajo people are pushing back and saying, ‘I do not want this anymore’ or ‘I have my own traditional beliefs, and I am tired of being told what to believe.’”

While roughly 60% of Navajo say they are Christian, the number may be significantly lower. Denetclaw explained that many people on the reservation mix Christianity with traditional beliefs. “The Mormon church has been pretty instrumental in doing missional work out here. But, they have confused a lot of people because the Gospel - and even the Christ that they preach - is not what we preach.”

A pan-Indian group, meaning a compilation of multiple tribes, has come together and established theological points for the Native American church. It focused on maintaining traditional beliefs and deities, while incorporating Christian Christ into the faith. "And so, you have another Christ being proclaimed," Denetclaw said. “It takes a bit of effort to engage them in their understanding and help them understand their christ and the Christ of the Bible.”

Several other barriers also complicate sharing the Gospel on the Navajo Nation. Denetclaw explained that the way the English is used on the reservation differs from the rest of the United States. For example, regarding the concept of sin, Christians learn biblically about good and evil. But, some Native American cultures emphasize balance or imbalance, meaning instead that evil is essential for life and that such duality is vital for harmony and balance.

English literacy presents a barrier, too, especially with English translations of the Bible. “Most of our people read at a third-grade level, and I have a whole shelf of ESV Bibles that they really cannot understand,” Denetclaw said.

Transportation is another barrier. Within Rock Springs Baptist Church, 40-50% of attendees have no way to get to the church. Using a van given by the Baptist Convention of New Mexico, funded by the Cooperative Program, the church drives an hour and a half route to pick up members and bring them to the church before once again taking them home. The church is even working to help a member make repairs on their car to reduce their travel time.

"The foundation for how we share ministry is from a relational standpoint. It is relational evangelism, coming alongside them and getting to know them," Denetclaw stated. "Over the generations, because of how missionaries, business, and the government have come in and pushed against people, the trust is very low."

One unique way RSBC works relationally to reach community members is through its wood ministry. During the fall, church members and other volunteers travel forty miles to a forest to cut wood. People will burn it during the winter to heat homes. The church piles the cut wood on its property. Then, members of the community come and buy the wood. “Eventually, over time, they start trusting us more. That barrier starts coming down. And, we can engage with them,” Denetclaw said.

Denetclaw said that people on the Navajo Nation come to Christ by witnessing God's power, versus many Americans who come by understanding the Bible and who God is. On the nation, “people wonder, ‘does your God have more power over these other deities?’ And, God chooses to move in power through minister out here,” he said. He described standing against local medicine men and that God has shown Himself time and time again.

Another way the church builds relationships is through its new associate pastor, Ben Talley. Talley started in May. He is a drug and alcohol counselor, originally from Memphis, Tennessee. “His heart is to reach these addicts. He wants to lead them out of that and then come alongside them and counsel them,” Denetclaw said.

New Mexico Baptists are invited to come in October to help cut wood for the ministry. Denetclaw also said the need for learning and other resources in the church is large. Last, he said, “As much as I appreciate the financial support and resource support, I have to say that prayer is paramount.”

The Southern Baptist Convention Annual Meeting in Anaheim, California, has now concluded. The new president has been instructed to appoint an Abuse Reform Implementation Task Force. As can be ascertained from the title given this work group, they will begin the difficult work of implementing…