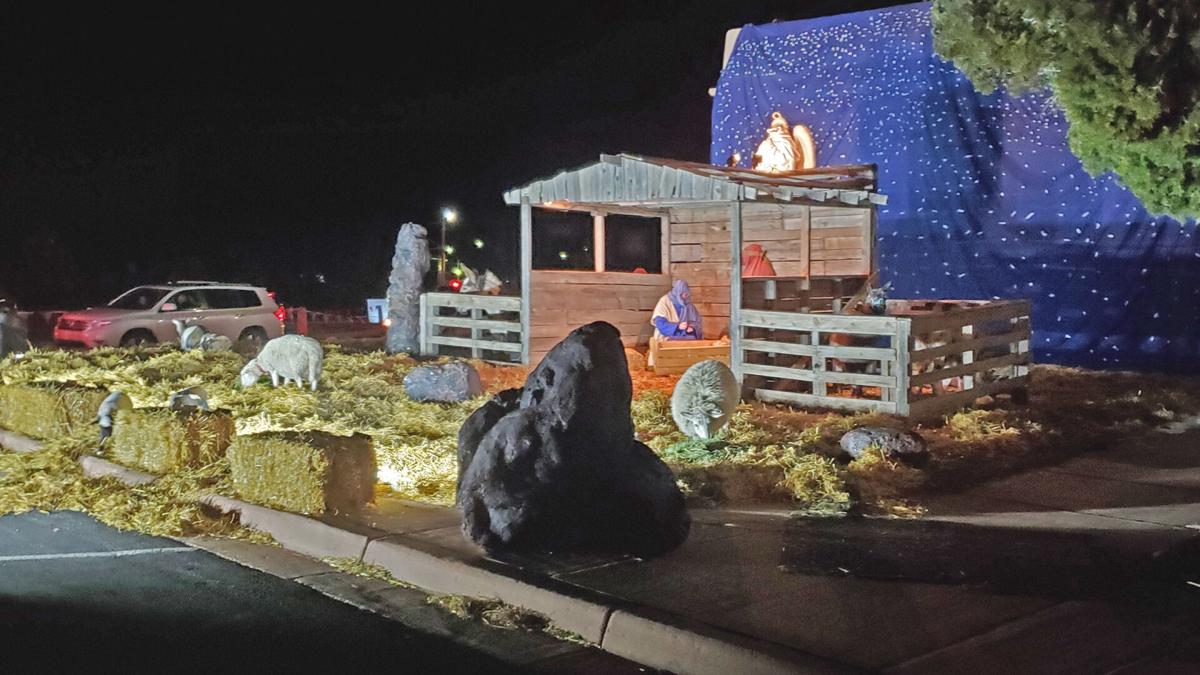 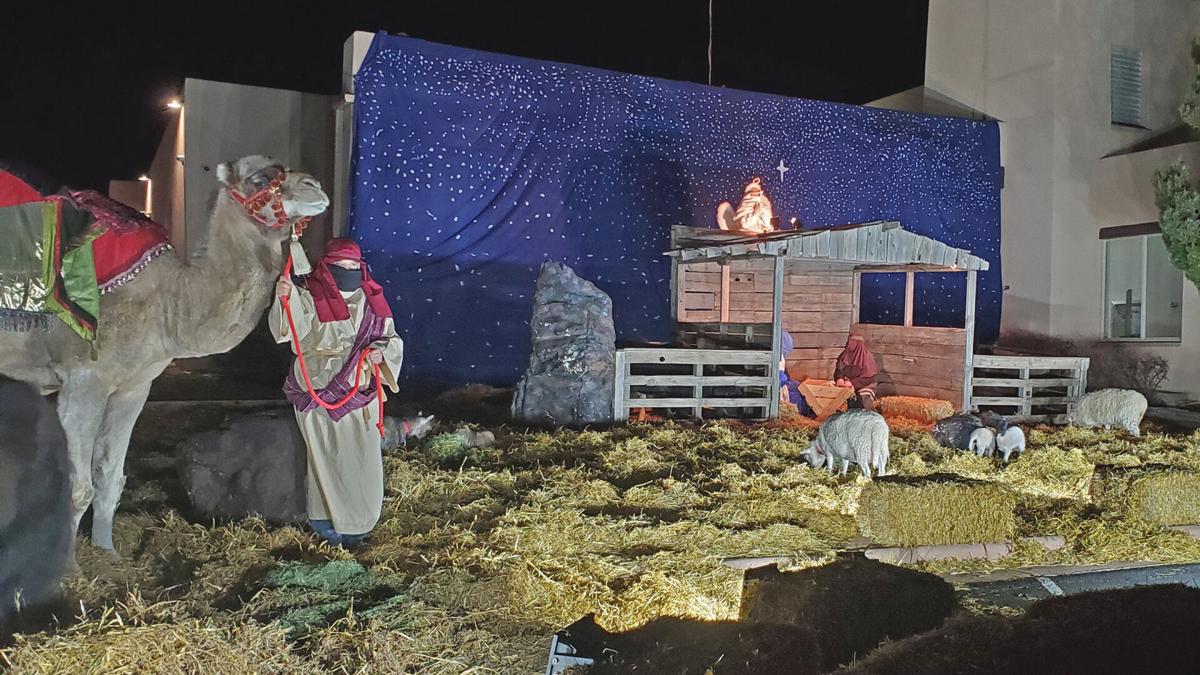 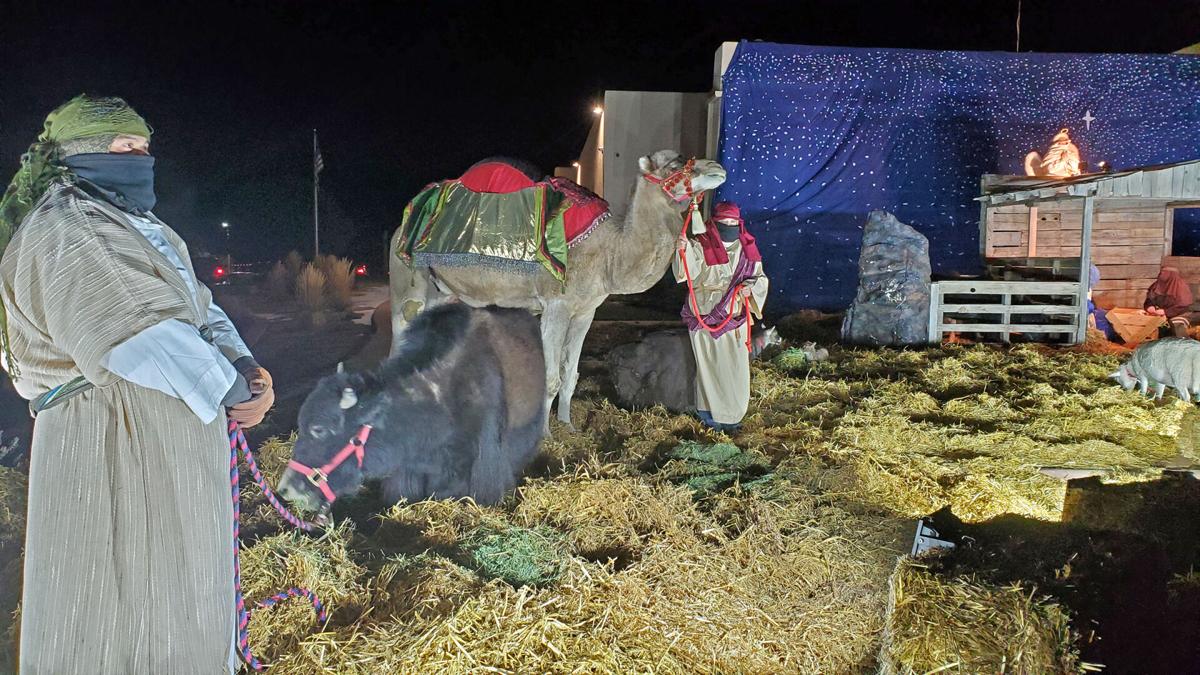 First Baptist Church, Santa Fe, presented their annual Live Nativity again this year. Because of government restrictions due to COVID-19, the event was a drive-through event. Vehicles traveled through the parking lot, viewing the nativity scenes along the way. Many stopped to look closer at the scenes, which included live animals. Members of the church volunteered to fill the character roles.

SANTA FE (BNM) - First Baptist Church, Santa Fe, traditionally presents a live nativity for the community. This year, due to COVID restrictions, the nativity display became a drive-through event. It ran on Friday, Dec. 18 and Saturday, Dec.19, from 6-9 p.m.

The event coordinator, Chris Wilson, explained that the church continued to plan the 2020 event, in some form, pending the Governor’s public health orders. “The church takes responsibility for the ministry very seriously. They want to provide something for our community to remember the birth of Jesus, especially now during these tough times,” Wilson told the Baptist New Mexican.

Wilson said the entire church participates in the planning, promoting and execution of the project. COVID restrictions limited the number of people on the property at one time during the event. The church wanted to comply with the mandated state gathering limits and planned accordingly.

For over 25 years, the church has presented the live nativity on the its property. Normally, parking lot attendants directed people to parking spaces. Then, shuttles transported people to the live nativity at the church when nearby parking filled up. This year, parking attendants directed traffic through the property instead of parking the cars. Traffic through the displays remained consistent throughout both evenings. Cars could stop and take a few moments at the displays, too. Signs directing cars helped keep the continuous stream moving. The signs also encouraged attendees to register for a gift on the church’s website.

Joan Lemmon enlisted people to play the nativity scene and marketplace characters. This year, the number of characters was reduced from past years, due to restrictions. Lemmon has coordinated that part of the event for many years. She begins recruiting volunteers in October. Volunteers commit to their assigned times so last-minute changes are minimal.

Coordination of character appearance times takes many hours. Outdoor scene character volunteers, such as Mary and Joseph and the angels, rotate every 30 minutes due to cold temperatures. The character rotations require many volunteers every night. One character usually serves three shifts during a three-hour event. When volunteers go inside to warm up, another shift takes over.

People are continually dressing in costumes for their next shift. In addition to Lemmon, five or six ladies help with the costumes and getting people dressed on time. Lemmon helps volunteers get dressed and ready for their shifts on time. She also coordinates shifts for the animals that appear in the scenes. Though there were fewer displays this year, live animals still filled the scenes.

“This is FBC’s gift to the community. And, [it’s our attempt] to remind people this is the reason we have Christmas – it’s the birth of Christ,” Lemmon told the Baptist New Mexican. “We have a wonderful opportunity to witness to people who might show interest in believing in Jesus and what Christmas is about,” she said.

Amy Redus, the pastor’s wife, played the role of Mary this year. Her son was Joseph. Since they were in the first shift of the night, they had plenty of time to get into their costumes and be ready. Typically, Redus has joined her husband to greet people. Getting to know people is a special part of the event, she said.

Redus recalled a single mom she met one year. The mom told her they were looking for a church home and loved the FBC’s ministry. The woman and her daughter later joined the church and became active in ministry. Redus said that others live nativity visitors have had similar experiences and decided to become a part. She said that she is open to serving wherever needed at the time. She and her children always plan to be a part of the event. The event “allows our church to love on the community. I feel like we’ve seen people join the church because they wanted to be a part of this,” Redus said.

An FM broadcaster provided access to a radio station where participants could tune in to listen to narration and music as they made their way through the parking lot. The live broadcast included a voice script that invited them to register for a gift on the church’s website.

Organizers had difficulty determining an official number of people in attendance since some vehicle passenger numbers varied. However, people could register for a free gift on the event’s registration site and could also leave prayer requests. Eighty-five people signed up for the gift, and many left prayer requests. The church’s prayer team prayed over those prayer requests live, in real-time during the event.

The Follow Up Team distributed the gifts in-person when possible. Families received a call before the team’s arrival to ensure an in-person visit would be allowed. Reports came back that many wonderful conversations and prayer opportunities happened over the phone. At some homes, the Follow Up Team left the gift at the front door.

Even though the event felt different this year, people responded with positive comments and gratitude that the church hosted the event in 2020. The church’s pastor, Reed Redus, said, “I was at the exit to the event, and I heard two things repeatedly: ‘Thank you so much for still doing something despite the pandemic,’ and ‘Thank you so much for doing something contactless and safe during the pandemic.’”

“Christmas worship is important every year, but the challenges of 2020 seemed to emphasize the importance in a unique way this year,” Redus continued. “People seemed hungry to worship. We had dozens of cars do multiple laps for hours to see the animals and meditate on the meaning of Christmas, so they could have something to do other than stay home.”

Sorry, there are no recent results for popular articles.