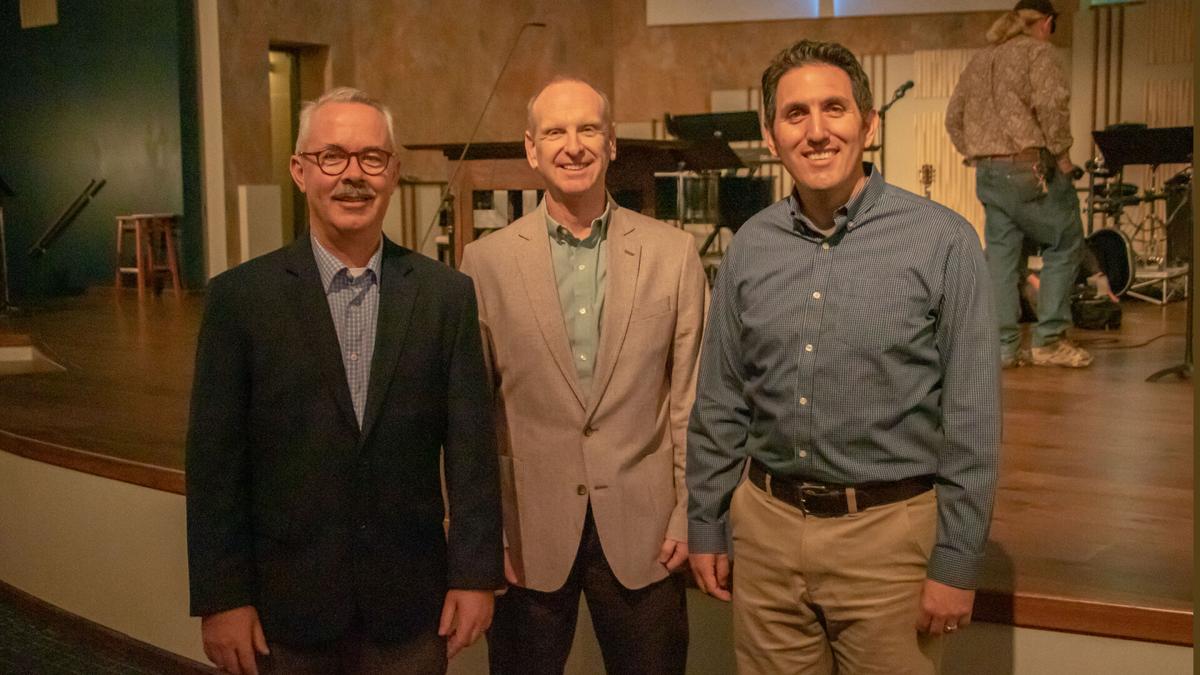 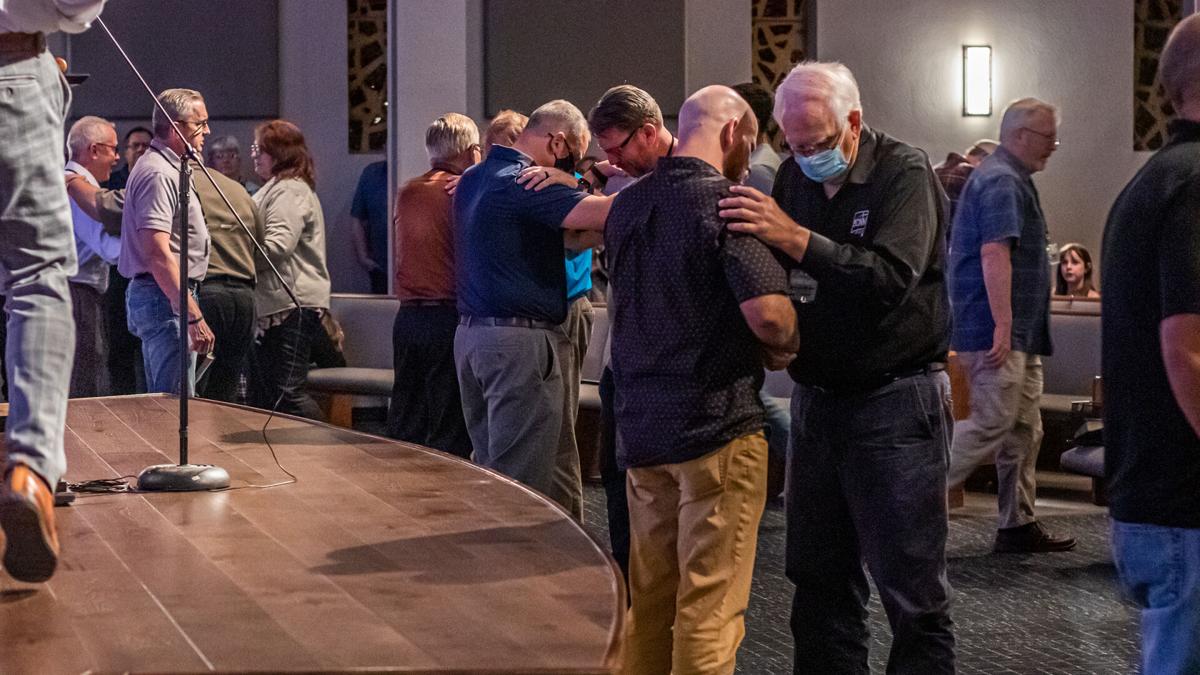 A prayer service during the Baptist Convention of New Mexico’s 2021 Annual Meeting drew so many individuals seeking to pray with prayer advocates that lines formed in the worship center’s aisles. The prayer service focused on asking for the Holy Spirit’s power in individual’s lives. It was led by Nathan Lino, pastor of Northeast Baptist Church, Houston, Texas. During other parts of the service, people prayed in groups and aloud. Lino was one of two keynote speakers for the Annual Meeting. SN5140

A prayer service during the Baptist Convention of New Mexico’s 2021 Annual Meeting drew so many individuals seeking to pray with prayer advocates that lines formed in the worship center’s aisles. The prayer service focused on asking for the Holy Spirit’s power in individual’s lives. It was led by Nathan Lino, pastor of Northeast Baptist Church, Houston, Texas. During other parts of the service, people prayed in groups and aloud. Lino was one of two keynote speakers for the Annual Meeting. SN5140

ROSWELL (BNM) - The Baptist Convention of New Mexico met for its Annual Meeting, Oct. 26-27, at First Baptist Church, Roswell. The church hosted 229 messengers from 89 churches and 57 visitors, for a total attendance of 286. Messengers conducted business, heard reports, listened to two keynote speakers and gathered for a prayer service that lasted most of one entire session. Messengers passed a 2022 budget, elected officers, approved resolutions, and elected new trustees for various state convention boards.

Other activities preceded the Annual Meeting sessions or met between them: a registration reception, an IMB missionary alumni meeting, a Hispanic pastors and wives' dinner, the annual Pastors and Laymen's Conference, the yearly New Mexico WMU Missions Celebration, a church planting luncheon, a bi-vocational pastors and wives’ dinner and a seminary luncheon.

The convention voted to continue sending 29% of all undesignated gifts from churches to the Southern Baptist Convention's Executive Committee for the Cooperative Program. The remaining 71% will fund the convention's ministry budget. The approved $4,135,091 ministry budget for 2022 reflects a $418,298 increase over the convention’s 2021 budget. The budget includes full-time, part-time and seasonal BCNM staff, regional missions, camps and collegiate ministries - approximately 75 employees. It contains $136,500 of CP exempt items, a decrease from the 2021 amount of $153,000.

The budget funds a new ministry team among the convention's missionary staff, a People Group Team. The new team will focus on evangelism, church planting and training for Hispanic and other churches that speak non-English languages and practice non-Anglo cultures. The team's creation responds to the growing need to reach the state's diverse cultural and language population. It will encompass the convention's current Native American ministries and give attention to currently untargeted groups in the state. The convention's present Hispanic ministry strategist, Ricardo Rivera, will lead the new team.

Amid increasing migration and refugee resettlement to the United States, the second resolution, "Regarding Refugees," addressed how churches and church members should relate to and treat refugees. The resolution encouraged churches "to minister in word and deed to refugees in the love of Jesus Christ." It also urged churches to pursue a Christ-centered Gospel purpose with refugees "with bold proclamation of His Gospel as every opportunity arises." Finally, it prompted churches to "continue providing spiritual and physical ministry as they are able, to the glory of God."

The third resolution, "On Baptist Unity and Maintaining a Public Witness," echoed a similar resolution passed by messengers to the 2021 Southern Baptist Convention Annual Meeting in Nashville, Tennessee, June 15-16. It exhorted messengers and church members to relate to each other and fellow churches with biblical love, charity, kindness and patience, even in disagreements. It further urged individuals to "protect the witness of Jesus Christ … by wise use of all forms of communication."

The fourth resolution, "Affirming a Biblical Worldview," addressed the rise of unnamed, unbiblical worldviews in current culture. Among its exhortations, it affirmed the Bible as the only authority for a Christian worldview. It rejected any philosophy or worldview that violated any of three specific thresholds. One, it cannot "denigrate the inherent value and equality of every person as an image bearer of God." Two, it cannot base a person's identity on "any ethnic, social, sexual or nationalistic category." Three, it cannot deny that sin against God is humanity's "primary problem," and sin's "ultimate solution" is solely the atonement and redemption found in Jesus Christ. The resolution called upon New Mexico Baptists to "live as ministers of reconciliation" and intentionally connect with people of rejected worldviews, aiming to "direct them to the hope and grace found only in Jesus Christ."

Nathan Lino preached about Christians' and churches' need to experience a fresh filling of the Holy Spirit. On Tuesday night, he led messengers in an interactive worship and prayer service to seek that filling. Messengers prayed together individually and in groups and prayed both aloud and silently at various times. One segment of the prayer service invited pastors and other individuals to come forward to prayer partners to ask for prayer for the Spirit's power. As individuals came forward, lines formed in each of the worship center's two main aisles with people waiting. Lino pastors Northeast Baptist Church, Houston, Texas.