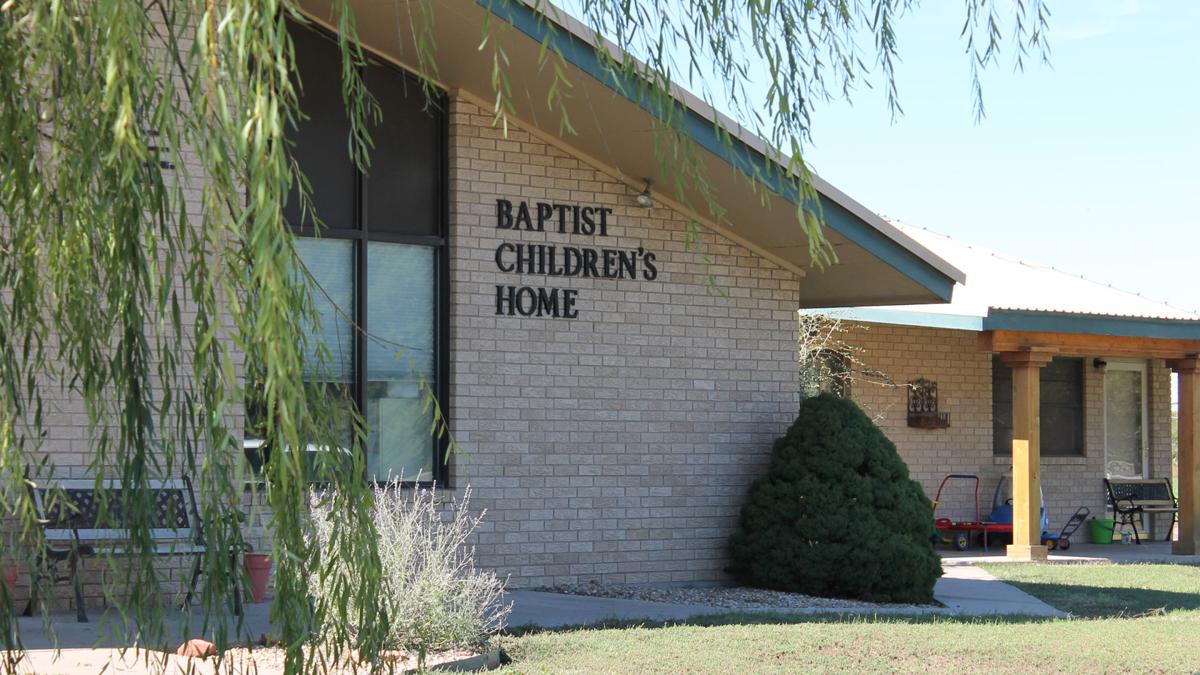 The New Mexico Baptist Children's Home in Portales is a ministry of New Mexico Baptists. It does not receive Cooperative Program funds. Instead, it is funded by individual donations and occasional Mission New Mexico State Missions Offering funds. 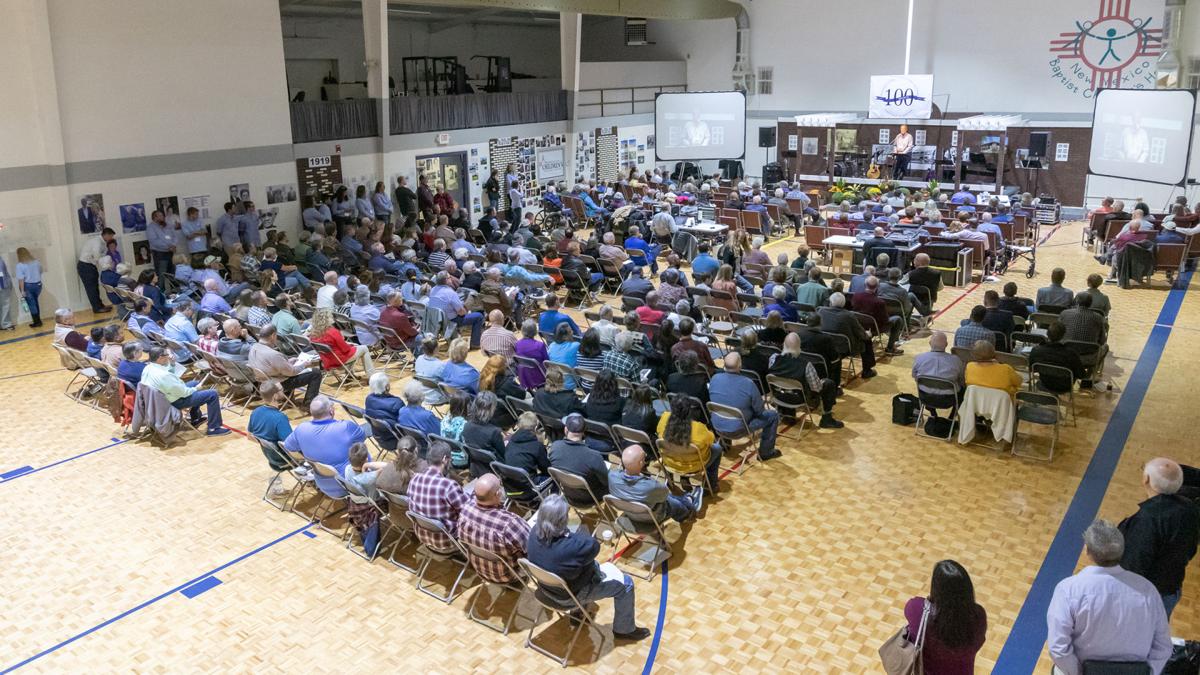 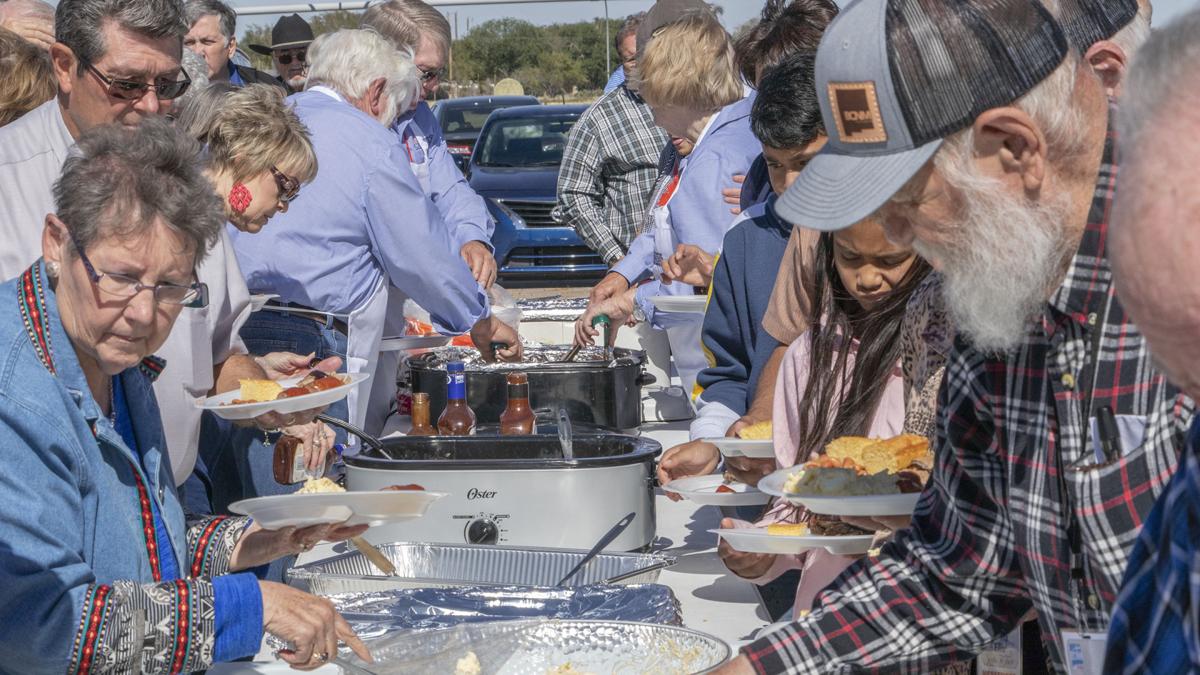 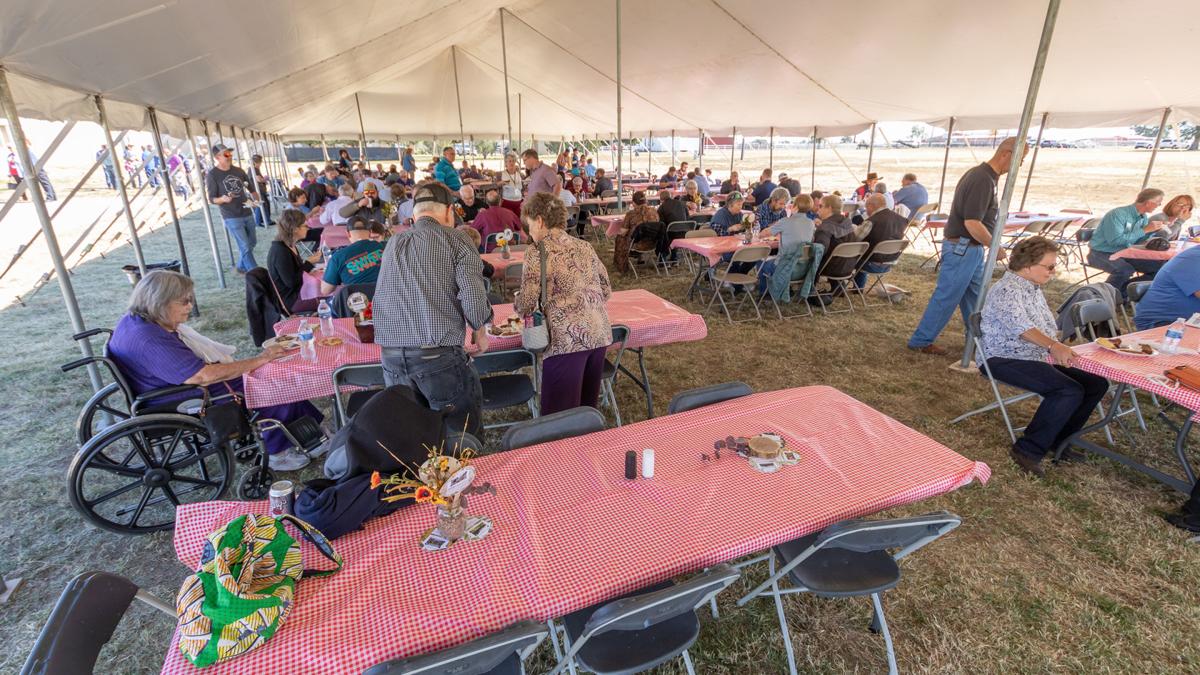 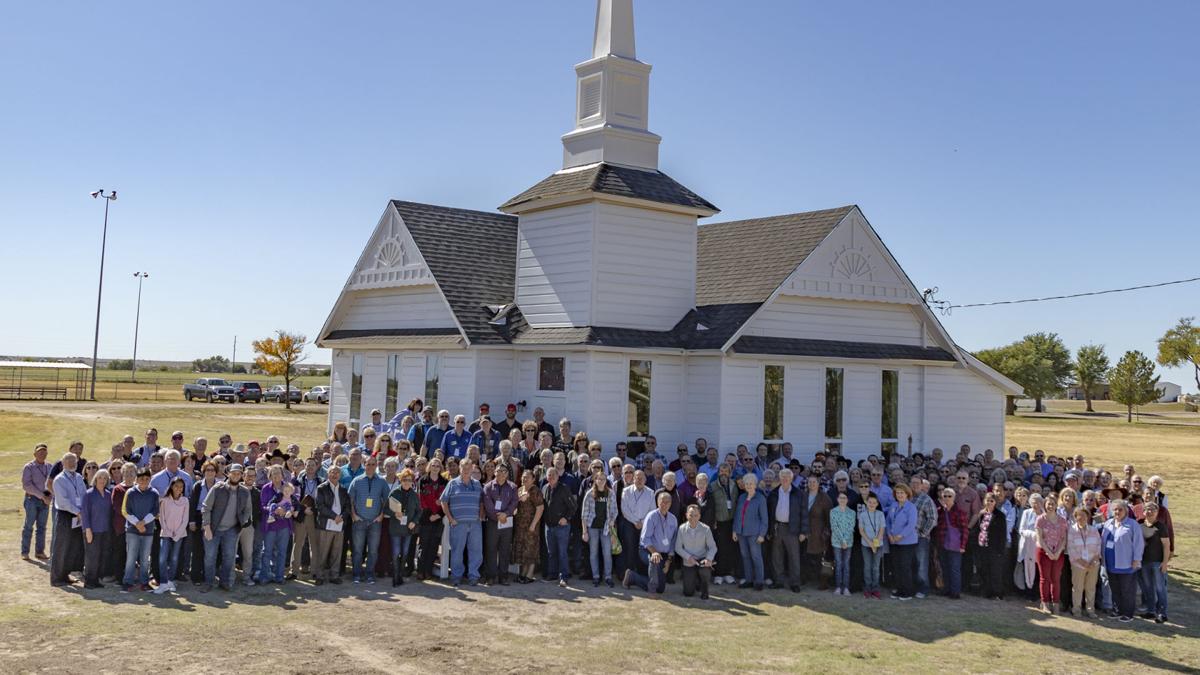 Messengers and guest pose in front of a newly built chapel on the grounds of the New Mexico Baptist Children's Home and Family Ministries' main Portales campus. The chapel was built to commemorate the 100th anniversary of the children's home. It is a replica of the building in which First Baptist Church, Portales, was meeting when the church founded the children's home. 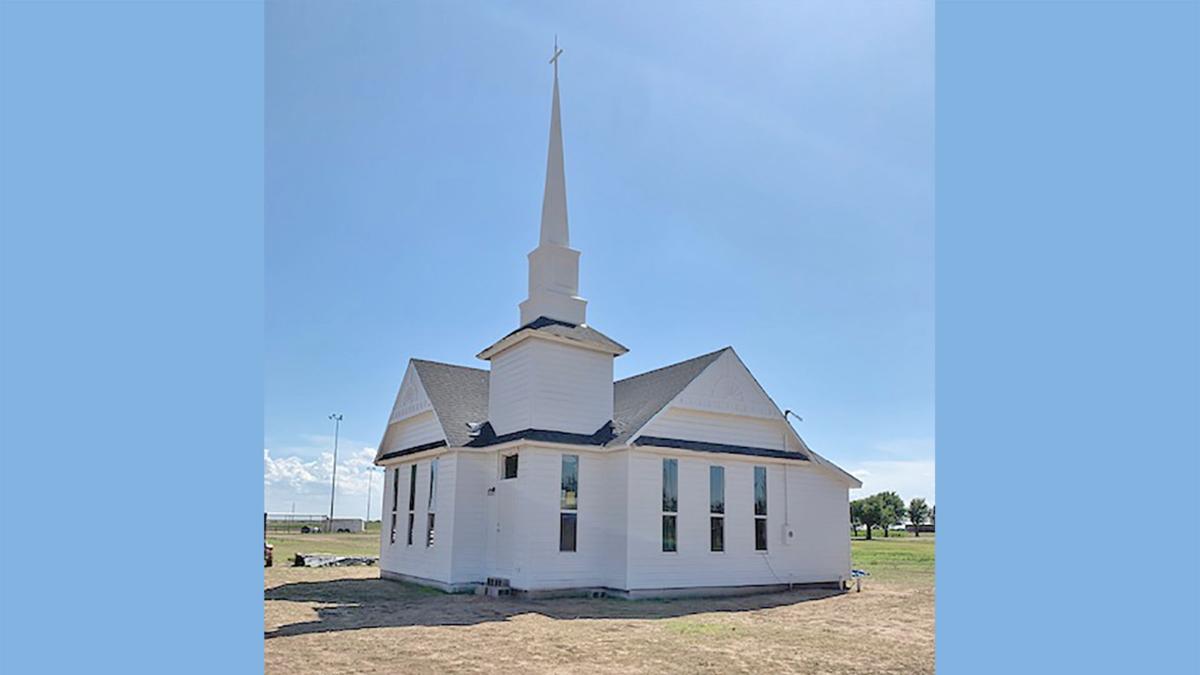 The outside of the new chapel, located on the Portales campus of the New Mexico Baptist Children's Home, sits ready for finishing touches in time for the home’s 100th anniversary.

PORTALES (BNM) - With remarks interspersed with humor, New Mexico Baptist Children’s Home and Family Ministries President Randy Rankin reviewed 100 years of ministry during his report the Baptist Convention of New Mexico’s 2019 Annual Meeting. The children’s home hosted messengers for the session in which Rankin spoke. After the session, the home also treated everyone in attendance to a BBQ luncheon under a tent just outside the NMBCH’s gym. The event celebrated the 100th anniversary of the home’s founding - in addition to finalizing the convention’s business.

Messengers filled the meeting space inside the gym. Some said the attendance at the children’s home was larger than the previous day’s session attendance in Clovis. At one point, children’s home staff and others stood around the walls because attendees had already filled easy-to-reach seats.

When messengers entered, they received a program containing a brief history describing and picturing the home’s 100-year impact. A façade of the home’s former building formed the back of the stage. It reflected historical photos of the building in the messengers’ programs.

Rankin began his report to the convention by describing the new chapel on the home’s main Portales campus. The building is a replica of the one in which First Baptist Church, Portales, was meeting when it launched the children’s home ministry in 1919.

Volunteers from a church in Grandview, Texas, preplanned the chapel’s construction and raised the building in five days, Rankin said. He also described how the volunteers prayed over the building and wrote Scripture verses on the rafters, doorposts and walls before finishing the surfaces.

Rankin emphasized how the 100-year celebration was a team effort by everyone at the children’s home. He introduced each staff member in attendance and recognized the efforts of the home’s current residents - children - too. After the recognitions, messengers applauded everyone’s efforts.

Photos and lists of names lined every wall of the gym in which the meeting met. The names recorded every child, in ten-year increments, that has ever stayed at the home. The photos showed children, facilities, staff, volunteers and donors who worked with the home in each decade. As Rankin explained the significance of the grand display, he became emotional, as did some of the messengers.

A highlight of Rankin’s presentation was his account of the home’s first matron. A couple had visited the home earlier in 2019, who claimed that she was the man’s great grandmother. He said that, because he grew up hearing stories of the home, they planned to visit while traveling. The man gave Rankin a book, “The History of the Eager Family, 1630-1952.” It contained an account of the matron, Mrs. Joiner. At one point, she served as a missionary in China, living in the compound Lottie Moon established, he said. In 1919, she became “the first mother” of the children’s home. As he retold segments of her story, he drew parallels with his own life experiences.

Sharing part of his own story, he told how both he and Mrs. Joiner had come to the home with broken hearts. “Every name comes here with a broken heart,” Rankin said, “They get to heal here.” They can be healed by the Great Healer, he explained. His wavering voice and messengers’ faces indicated another emotional moment had come. He told New Mexico Baptists, “You all are part of that … when you pray for us [and] when you pray for us.”

He recounted meeting a woman who had stayed at the home in 1937. He said he asked her what the home meant to her. “I know without a shadow of a doubt that Jesus Christ saved my soul, but the Baptist Children’s Home saved my life,” she answered. Then, Ranking told the messengers, “We are going to keep on going … [doing that.]”

Other business and sermons followed Rankin’s report. After the session adjourned and before volunteers served lunch, messengers, children’s home staff and children posed in front of the new chapel for a group photo to record the occasion. Rankin also offered messengers tours of the campus facilities, including its often-mentioned barn and animals for the home’s 4-H activities.

The New Mexico Baptist Children’s Home and Family Ministries includes its main campus with four large housing residences and a separate counseling facility in Portales, as well as a developing facility in Estancia. The home receives no Cooperative Program funds for its operations. Donations and tangible gifts from New Mexico Baptists and others provide the home’s operating budget and supplies. The BCNM’s Annual Meeting met for its first day at Central Baptist Church, Clovis, before moving to the children’s home for its final session.