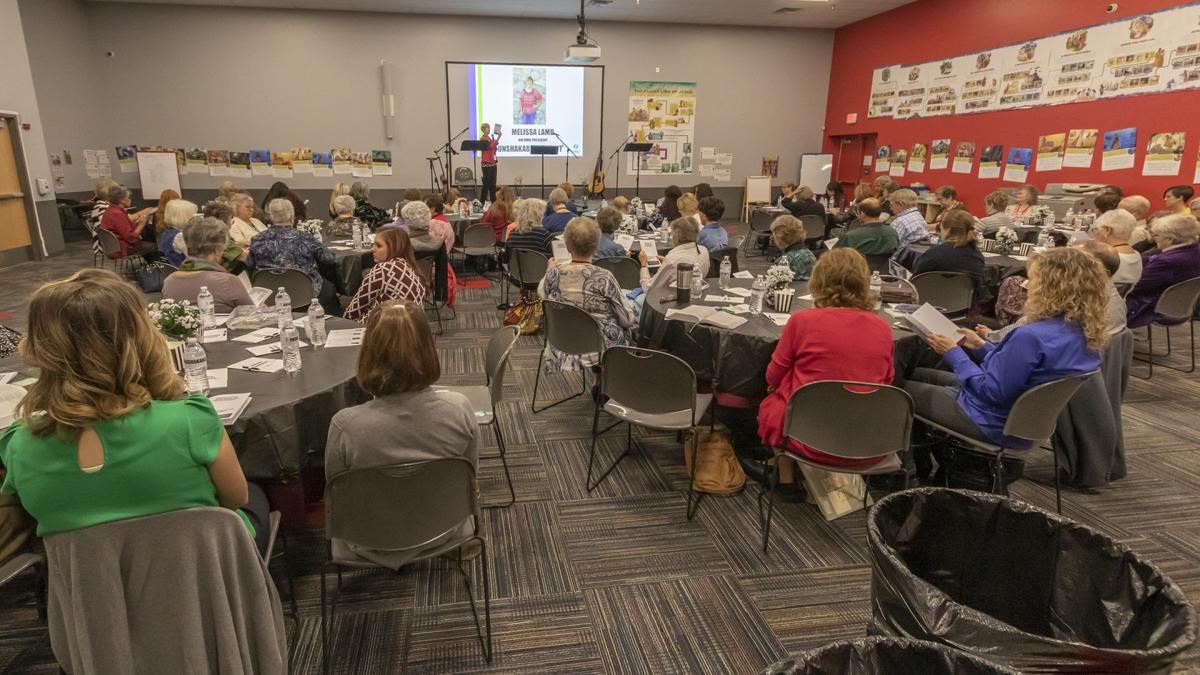 About 100 people gathered for New Mexico WMU’s annual mission celebration and annual meeting. The group worshipped together, listened to speakers, heard testimonies, and participated in missions activities as part of the gathering. 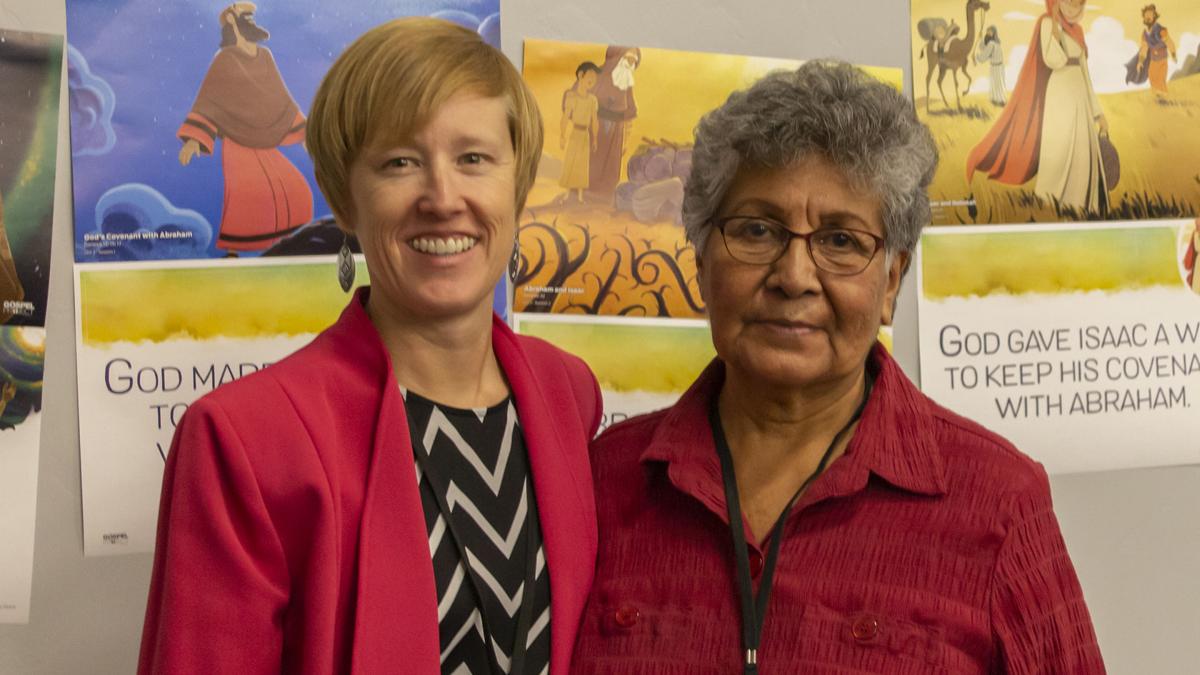 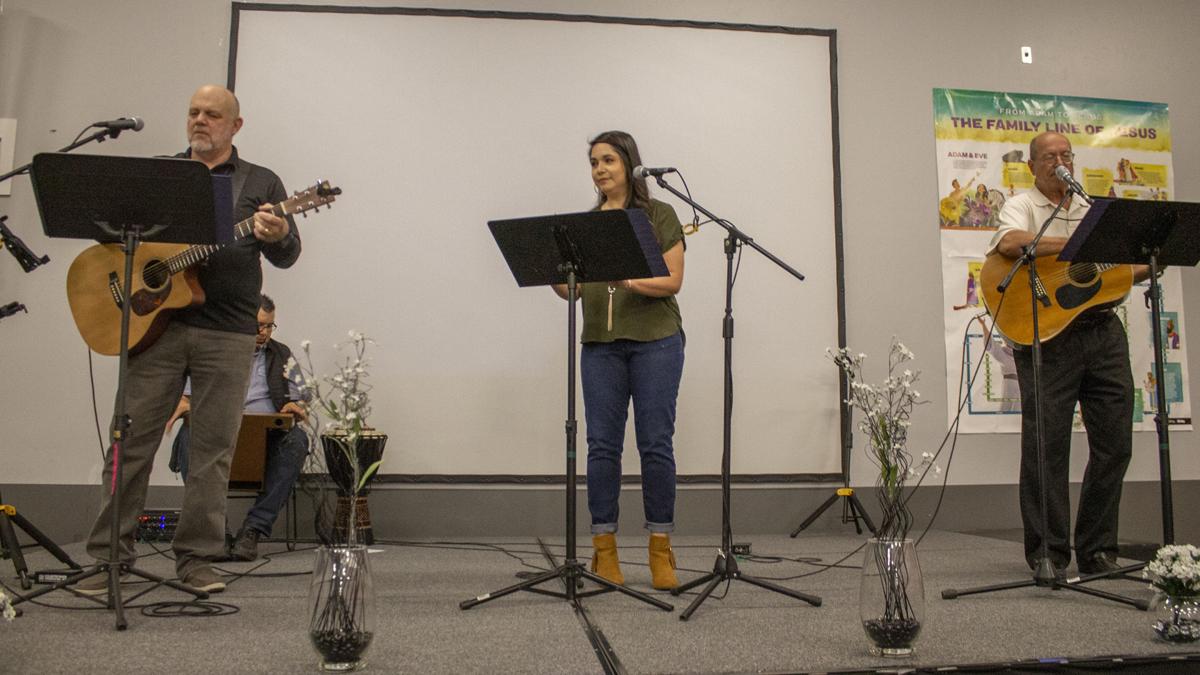 About 100 people gathered for New Mexico WMU’s annual mission celebration and annual meeting. The group worshipped together, listened to speakers, heard testimonies, and participated in missions activities as part of the gathering.

LAS CRUCES (BNM) - About 100 people gathered for New Mexico WMU’s annual mission celebration and annual meeting. The group worshipped together, listened to speakers, heard testimonies, and participated in missions activities as part of the gathering.

The worship team from Calvary Baptist church, Las Cruces, launched the 2018 WMU Missions. Gregg Higgins, Calvary’s worship pastor, led the group for the initial worship time and three more times throughout the morning meeting. The meeting serves as New Mexico WMU’s annual business meeting, as well as a time of celebration and fellowship.

The Baptist Convention of New Mexico’s executive director and lead missionary, Joseph Bunce, welcomed the women, men, and a few children at Mesilla Park Community Church, the meeting’s host. In his greeting, he mentioned Malachi 3:16, where God pays attention to His faithful people and records their faithfulness in a “book of remembrance.” He encouraged those attending to continue praying for missionaries and contributing to the Cooperative Program.

Melissa Lamb, New Mexico WMU president, from Santa Rosa, presented the morning’s theme of “Unshakeable Pursuit.” She led the group to read, in unison, 1 Corinthians 12:58. It says, “My dear friends, stand firm and don't be shaken. Always keep busy working for the Lord. You know that everything you do for him is worthwhile” (CEV).

Three New Mexico State University students gave testimonies of their summer missions experiences. M. Crouch participated in Project Impact in Denver, Colorado, and told his story. The project trains students to present the Gospel to people wherever they go. Students also participate in extensive personal discipleship training. The program’s study of the Gospel of Mark particularly impacted Crouch. It prompted his desire to go elsewhere sharing the Gospel. Through the study, he also sensed God calling Him to ministry or missions.

Following Crouch's presentation, K. White shared her experiences from two months in Southeast Asia. She expressed thanks for the opportunity she learned about through her campus’ Christian Challenge ministry. Her team focused on reaching Muslims. She described feeling disconnected from their culture and unsure how to relate to people, especially a group of Muslim girls. A friend counseled her that girls are girls and that their team was not there to reach a people group, but to reach girls.

During Ramadan, people spent the evenings breaking the fast of the day. During those evenings, her team gathered in a hallway at a university campus mosque to sit on the floor and eat. There, she said, Gospel conversations and talking about Jesus were “easy.” Her team, she explained, planted many “seeds” and relied on God to produce spiritual “fruit.” White also said she did the same tings she has to do at home. “Missions is not a trip,” she said, “but a journey.”

Connie Dixon, the BCNM’s state WMU director, from Elida, explained Project Help, an initiative of National WMU that raises awareness of world issues. The next four years’ emphasis will be ministering to refugees. She and PJ, a Baptist worker with Muslims in New Mexico, presented a Refugee Simulation that focused attendee’s attention on refugee’s struggles.

Dixon and PJ asked participants to work in complete silence and four favorite things to do, four roles which identify themselves, four important physical possessions and four of the most important people in their lives - all on colored strips of paper. Then, they removed one item from each color, tore it up and put it a box on their table. Dixon and PJ asked, “How did it feel?” They remove another - without looking - and threw it away. Then, outsiders in the room randomly removed more items, leaving each person with only two items. At each step, Dixon and PJ asked the same question. Finally, PJ explained that millions of refugees face such losses every day.

Lamb opened the morning’s business session officer elections. She presented the WMU Board’s recommendation to reelect Edna Romero, of Taos, to a second term as vice-president. With no other nominations, she won by unanimous vote. Then, Romero presented the Board’s recommendation that Melissa Lamb be reelected for a second term as New Mexico WMU president. With no other nominations, she was elected unanimously, too. While members of the WMU Leadership Team stood with the newly elected officers, Linda Cooper, National WMU president led in prayer for their upcoming work.

Linda Cooper spoke and encouraged those in attendance “to know God more” and to “make disciples who make disciples.” Using 1 Corinthians 15:58 and the meeting’s theme, she asked, “What's in your cup [that] will spill out of your cup. Is it joy, peace and humility or anger, despondency and sadness? You choose.” She finally challenged everyone, “Are you in an unshakeable pursuit [that will continue] until all have heard?”

Dixon presented Cooper with an Edna Romero original pot to thank her for coming to New Mexico. Then, Dixon acknowledged the “unshakeable pursuit by” demonstrated by New Mexicans who have stood firm and busily work for the Lord. Finally, she led prayer for the missionaries who had birthdays on the day of the meeting.

Randy Rankin, executive director of the New Mexico Baptist Children's Home and Family Ministries, closed the meeting with some stories and his own personal missions testimony. The mission trip that impacted him most as a child was visiting the Baptist Children's Home. Through a partnership with the BCNM, the NMBCH has expanded its ministry to include Christian Women’s Job Corps and Christian Men’s Job Corps.