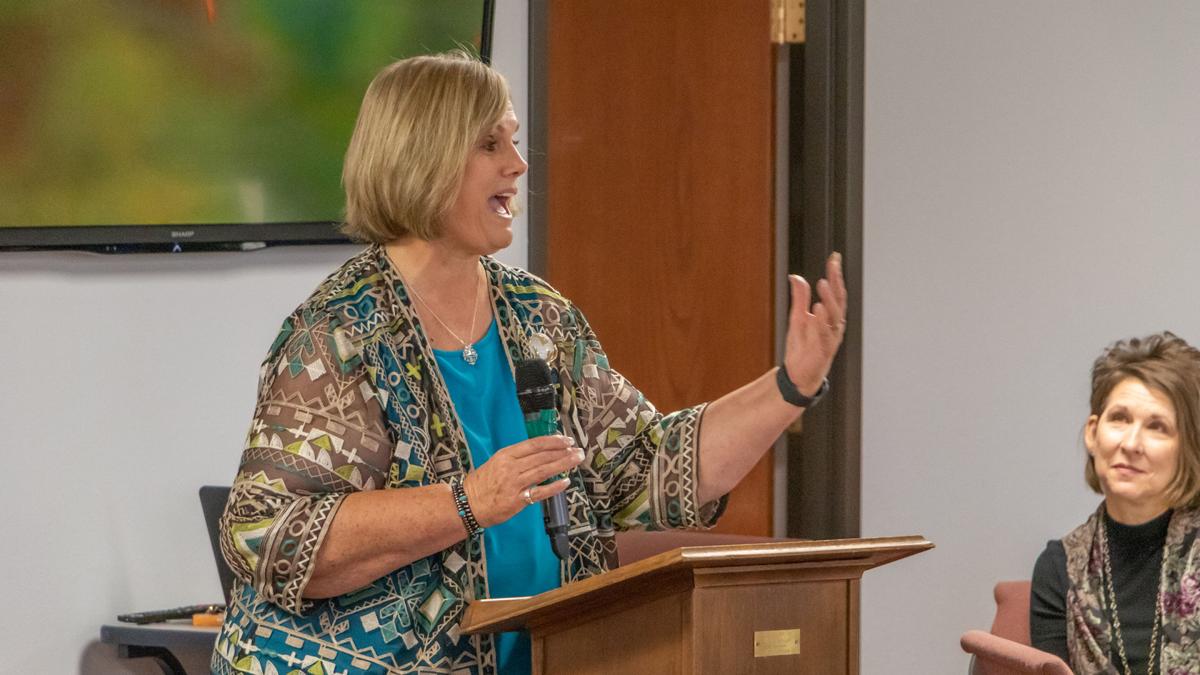 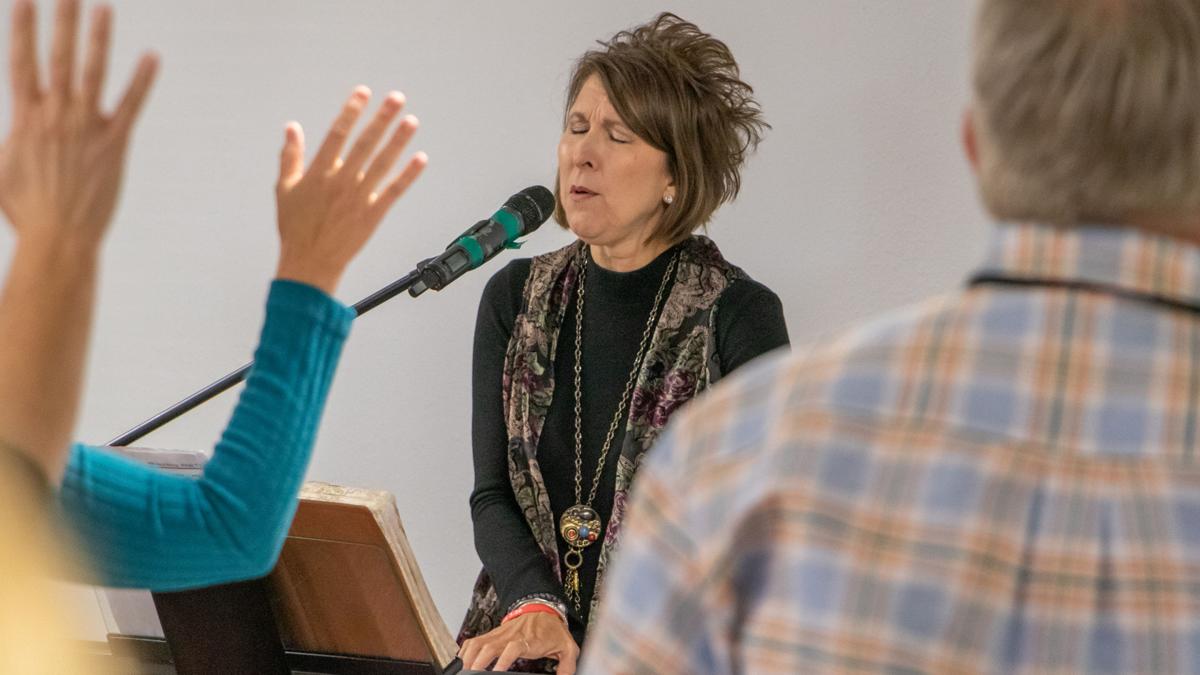 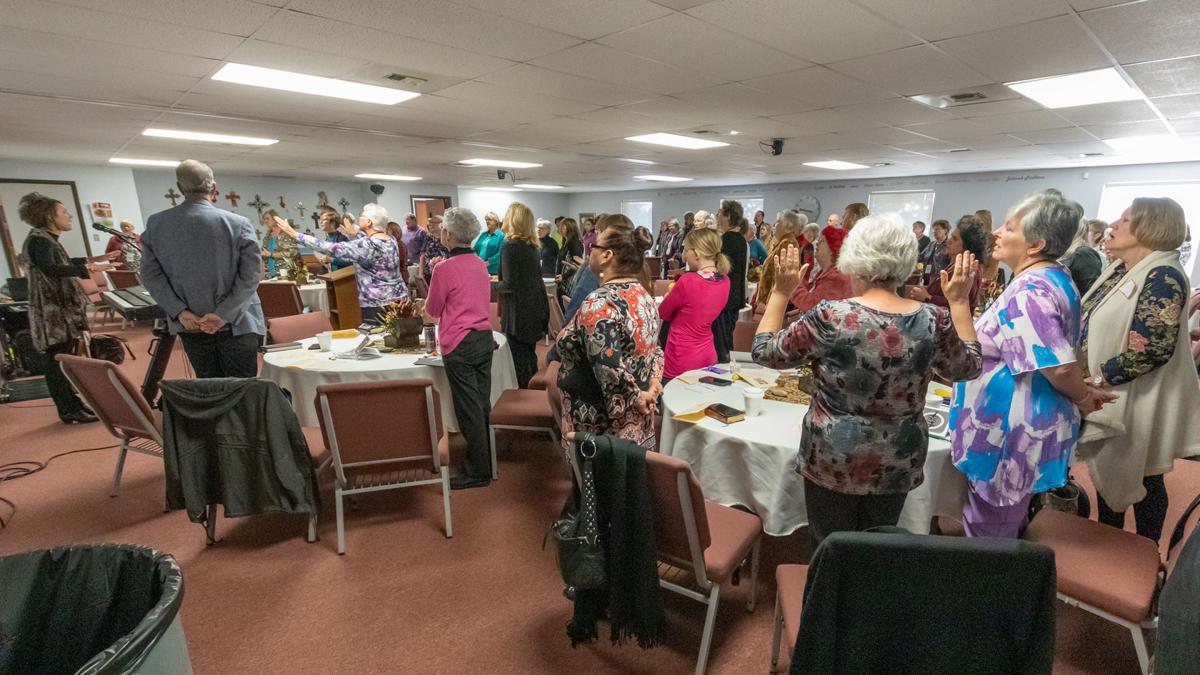 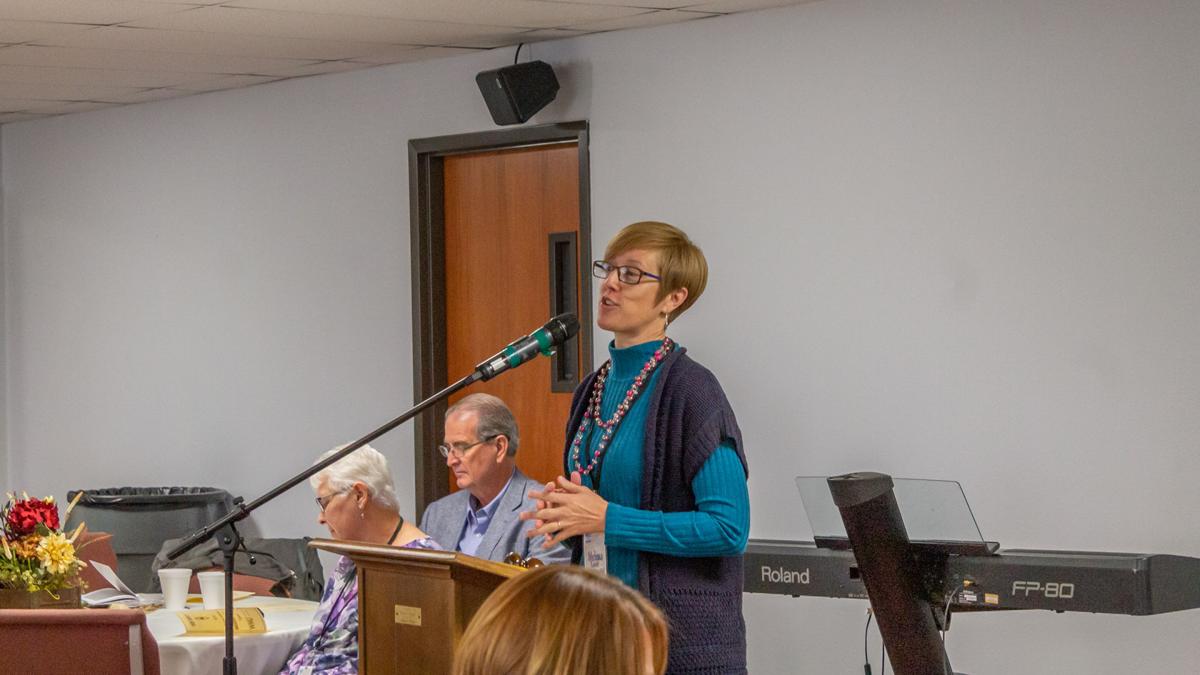 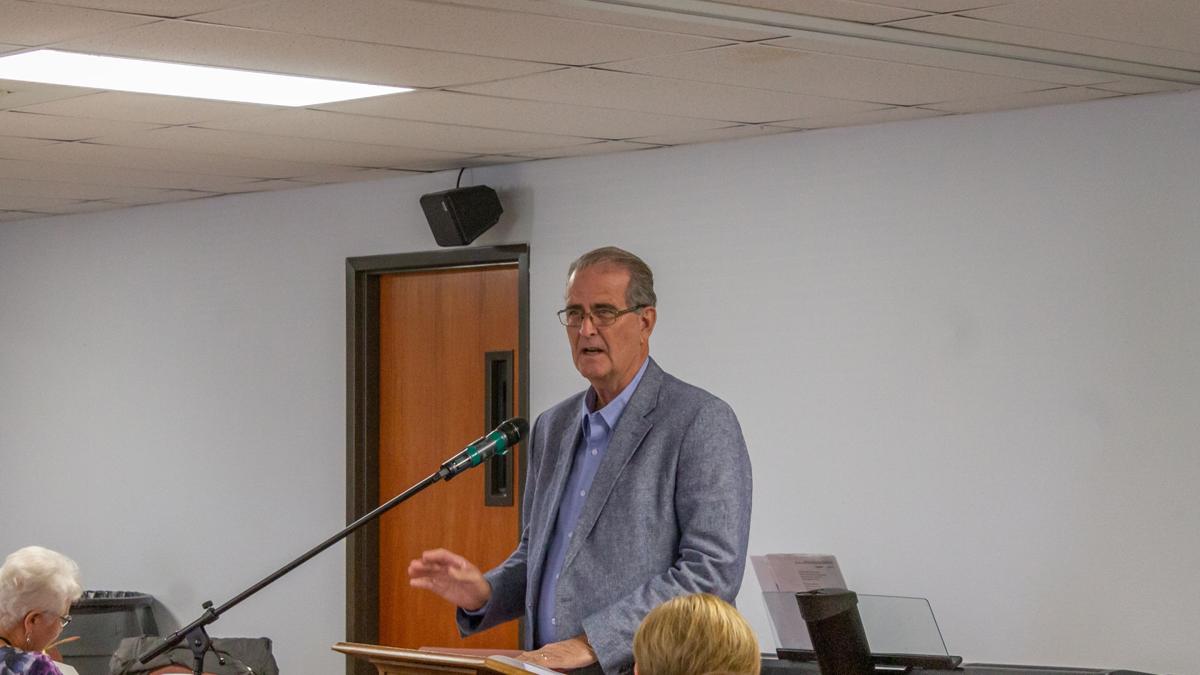 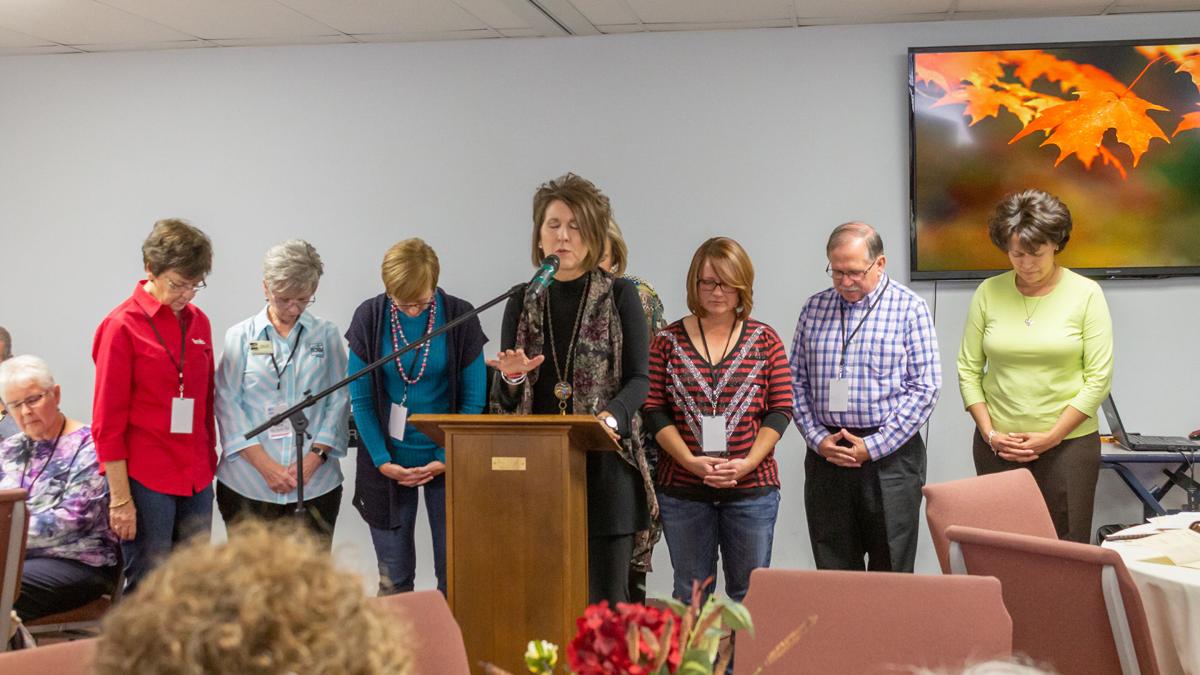 Teresa Harmening, a worship leader from Bagwell, Texas, began the meeting by singing an original song entitled “Unshakable Pursuit,” before leading the group in musical worship.

BCNM executive director, Joseph Bunce, brought greetings from the BCNM and stated that “every church ought to have GA’s, RA’s, Mission Friends and Acteens” because we need to instill in our boys and girls the importance of missions.

Kathy Splawn, WMU director at Central Baptist Church, welcomed the group on behalf of the church and its missions organizations. She encouraged women to plant seeds in children, to support missions and to “have a blessed time today.”

Aguirre is the assistant director for Eastern New Mexico University’s Christian Challenge, as well as the part-time youth pastor at First Baptist Church, Portales. This past summer, he traveled to Slovenia with other Christian missionaries. According to Aguirre, when he and his team arrived in Slovenia, they were thrilled to be met at the airport by Bunce, who was finishing a separate mission trip in the country. Aguirre’s team was in Slovenia for ten weeks.

According to Aguirre, less than 1% of Slovenians have heard the Gospel. He told of a man he met named Andre. Andre had a hard heart and was offended that God could care and love as much as he was told, Aguirre said. He also recalled meeting several boys from Macedonia. He said they were receptive to the Gospel, explaining to Aguirre that they had never heard anything close to the message they received from him.

Aguirre closed his report by thanking those in attendance for their financial contributions, which allowed him to participate in the trip.

Gershon, a student at ENMU, served in Denver this past summer with the Denver Discipleship Project. She and her team stayed on the campus of Colorado Christian University and were each required to find a full-time job during the summer. Gershon worked with children at a summer camp.

According to Gershon, she shared the Gospel with a co-worker who, in turn, shared what she believed. By the end of the summer, she was able to spend extra time with the co-worker and share the “whole Gospel.” She said it was wonderful to be able to share with a random stranger, and the girl was baptized in the river by summer’s end.

Gershon shared that Splawn was her mission leader when she was a child and was grateful for what she learned.

Lamb called a business session to order and asked for the endowment report from Sandra Fonseca, multicultural consultant of the state WMU. Funds received included $1,613 for the National WMU Foundation; $1,823.17 for the New Mexico Baptist Foundation’s Share the Joy of Missions initiative; $3,100.00 for WMU’s Second Century Fund; and $1,116.00 for the Edwards Ethnic Leadership program. According to New Mexico WMU Director Connie Dixon, the funds are being used to train leaders in New Mexico.

The WMU Staff and Leadership Team, which includes Lamb, Herb Gage, Fonseca, Henderson, Vickie Butler and Crickett Pairett, was asked to join Dixon at the front of the room as Harmening prayed for their ministry in the coming year.

During her president’s address, Lamb shared how important the New Mexico Baptist Children’s Home and Family Ministries was when she was a young married student at ENMU. According to Lamb, she and her husband, Beau, expected to join a volunteer team helping the kids with roping. Instead, they were appointed relief house parents. Mark, a young man at the home, became their unofficial son, and they watched him come to know the Lord and grow into a godly man. He is now a deacon in his church. Mark’s two children are the unofficial grandchildren for Lamb and her husband, she said.

Randy Rankin, president of NMBCH, was the special speaker at the gathering. He said that early in his life, as a summer missionary, he expected to go to Hawaii. But, his organization assigned him to a children’s home, which gave him a background in the work of a children’s home. God was preparing him for ministry in children’s homes.

Rankin shared that his grandmother took him to all her WMU circle meetings as a child, exposing him to stories about missionaries. He recalled a missionary nurse from Japan who spent the night at his home as a child. He said the missionary used Matthew 17:20 to illustrate a story. According to the missionary, she and her colleagues once received a donation of mountainous land, on which they could build a hospital. A man with a bulldozer volunteered to move the mountain, and they built a hospital on the site. “The key,” Rankin said, “is God, because nothing is impossible with Him.” We need to acknowledge His power, His glory, and His goodness and not think according to our desires. He wants us to see what He can do, including moving mountains, Rankin said.

Rankin said that answering questions from children, such as, “Why do I have to live in a children’s home?” or “Why can’t I live with my parents?” provides an opportunity to share Bible stories of Moses, Joseph and Samuel. Their parents didn’t raise them, but God was preparing them for greater things because he’s a big God, Rankin said. We need to be ready to say, “God, You’re going to do this,” he added. Rankin challenged those in attendance to “be a bulldozer; don’t limit yourself with little eyes. We’re the only Jesus some people will ever see.”

Rankin said it is okay to make kids go to church, where they will hear the Gospel. He told of having to go to GA camp every summer because his mother was the camp nurse. He helped in many GA coronations. During camp, he learned the song, “We’ve a Story to Tell to the Nations.” He asked why we don’t sing that song anymore, since the message is still essential today. He said, “We have the greatest story to tell. Keep spreading it. Never take your eyes off God. Never stop listening. Never stop saying ‘thank you.’” Kids at the children’s home have come to Christ. He described himself as “the boat” to bring kids to the Lord and challenged WMU to continue to grow. He expressed thanks for WMU and Christian Women’s Job Corps.

Dixon then introduced Carol Smith, a missionary in Russia, who was her first ministry assistant when she took the role of state WMU director. In giving the WMU report, Dixon said New Mexico WMU is doing well. Partnering with NMBCH has included forming Christian Women’s (and Men’s) Job Corps, and there are now 20 sites across the state. Celebrating the 100th anniversary of NMBCH, the printed program included a historical timeline of WMU and NMBCH partnering together.As she researched, Dixon was encouraged to see how each successor has trained and how that heritage built the future.

WMU dedicated the gathering to Addie Robinson, who died Aug. 11, 2019. She and her husband, Ken, served many years in New Mexico.

“Unshakable Pursuit” is the National Women’s Missionary Union (WMU) theme, based on I Corinthians 15:58, “Therefore, my dear brothers and sisters, stand firm. Let nothing move you. Always give yourselves fully to the work of the Lord, because you know that your labor in the Lord is not in vain.”

Karen Pilgreen is a volunteer writer with the Baptist New Mexican.