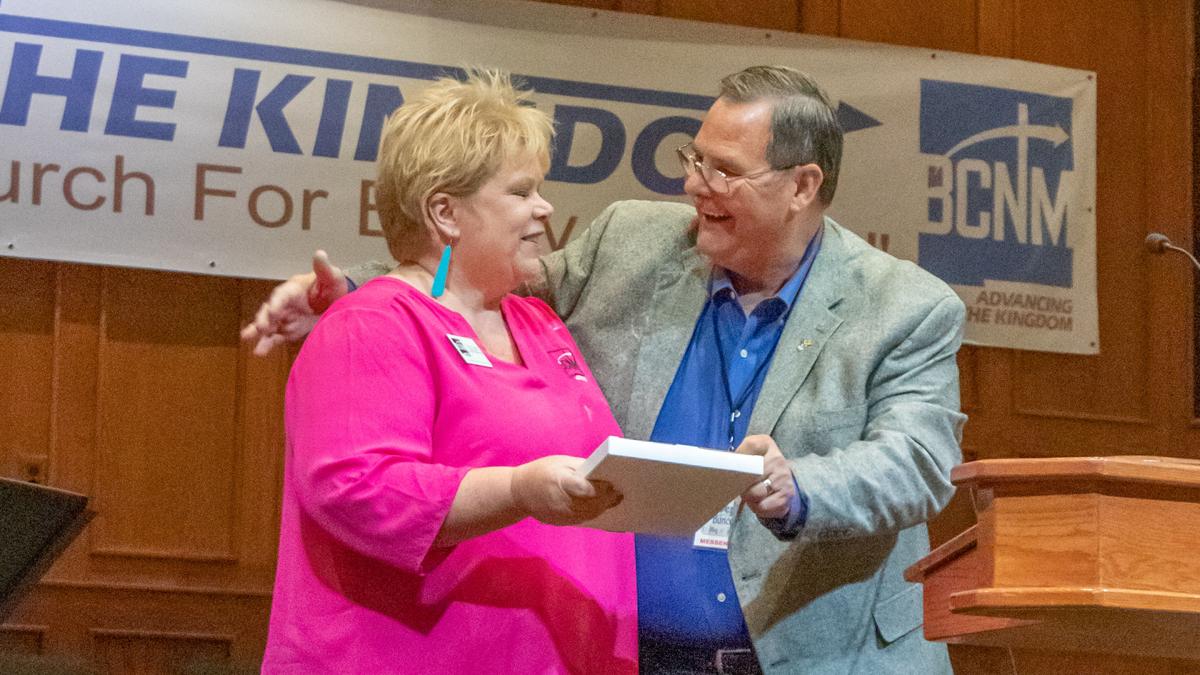 Prior to his Oct. 22 Executive Director's Report, Baptist Convention of New Mexico lead missionary, Joseph Bunce, presented Cheryl Vaughn with a gift commemorating 25 years of services with the BCNM. 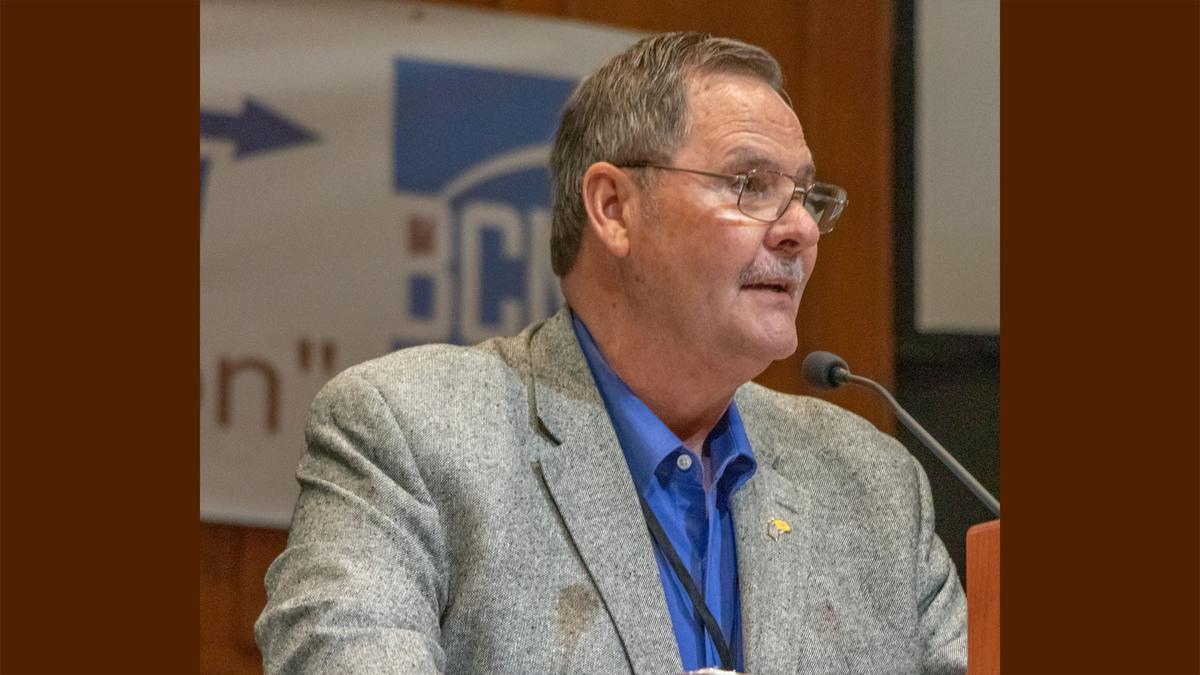 Prior to his Oct. 22 Executive Director's Report, Baptist Convention of New Mexico lead missionary, Joseph Bunce, presented Cheryl Vaughn with a gift commemorating 25 years of services with the BCNM.

Prior to his report, Bunce, presented Cheryl Vaughn with a gift commemorating her 25 years of service with the BCNM.

Bunce then told messengers and guests that he planned to share three things with them during his address. “I was called by a convention, and I am here tonight to report to a convention,” he said.

Reflecting on the 1977 convention, Bunce spoke fondly of Chester O’Brien, a former BCNM executive director who passed away Sunday, Oct. 20. Bunce appeared emotional as he spoke of O’Brien’s legacy. After telling a story of a man who died before O’Brien could witness to him, Bunce said to those listening, “You and I may not have a second opportunity to share the Gospel a second time.”

Next, Bunce recognized and celebrated achievements since the convention’s last meeting in Clovis in 2012. During that meeting, messengers outlined a seven-fold plan for the BCNM. One of the objectives is aimed at becoming a convention that is financially independent and not dependent on outside sources, Bunce said. He reported that since 2012, the convention has become debt-free. Because of this, “New Mexico can turn loose of more so money can get to places where it is most needed,” he said.

In an apparent reference to the BCNM restructured partnership with the North American Mission Board, Bunce, stated, “We always want to be partners with autonomy,” emphasizing that the BCNM’s priority is to reach New Mexico with the Gospel. Turning to Acts 28:16 and Acts 28:29-30, Bunce spoke of how the Apostle Paul concluded his ministry and the impact he left on those he encountered along the way. “It is impossible to do a critical mission without godly conviction and benediction,” Bunce said.

He encouraged pastors facing heartbreak and hardship not to give up. “You and I may ask why the book of Acts closes [the way it does]. I believe it is because the Gospel wins. I believe God is telling us that nothing holds the Gospel back,” he said. Bunce concluded his report by announcing his intention to retire from his position in 2021, telling New Mexico Baptists, “all of us are interims.” Bunce’s job, he said, “has been to bridge one generation to the next.”

According to Bunce, the State Mission Board will begin to implement a succession plan at its next quarterly meeting in January 2020. “It will be a process with the intent for me to retire in 2021. That is my goal. It is not because I don’t love you - it is because I love you,” he said.

Bunce stated that he would “not appoint or pick” his successor. “That’s not my role,” he said. Bunce noted that he will have served in his current capacity for 15 years at the time of his retirement, five years longer than the average executive director, according to Bunce. He then joked that “it’s kind of hard to ride the mule if the guy won’t get out of the saddle.”

In closing, Bunce assured New Mexico Baptists that he is “not resigning from ministry. God gave me a pastor’s heart, and that’s how I’ve sought to lead [the convention].” He indicated a desire to possibly pastor a small country church in the future.